Calcific Tendinitis of the Patellar Tendon with MRI Correlations

Background: Calcific tendinitis is a predominantly cell mediated disease that has been well documented in multiple areas of the body, but very rarely in the patellar tendon. This study presents an unusual case of severe patellar calcific tendinitis initially diagnosed as mucoid degeneration and partial patellar tendon tear after a sports injury. Three modalities of diagnostic imaging were unable to identify calcific deposition which was only discoverable intra-operatively. We describe this unusual presentation and optimal imaging sequences for diagnosis.

Case Report: A 51-year-old male presented three weeks after injuring his left knee playing tennis. The patient lunged forward with his left foot to hit a ball when he felt a sudden sharp pulling sensation at his anterior knee over the patellar tendon. This pain was most pronounced with weight-bearing activities and did not improve over the next month. Left knee radiographs were unremarkable; MRI and ultrasound images demonstrated diffuse patellar tendon partial thickness interstitial tearing and what appeared to be mucoid degeneration. None of the standard imaging modalities identified calcification. Surgical exploration of the patellar tendon revealed a large pocket of classic calcific deposition under pressure which was evacuated prior to tendon repair. The patient had rapid resolution of his pain and was full weight bearing at two weeks post-operation.

Conclusion: Calcific tendinitis of the patellar tendon is an unusual condition that can present diagnostic difficulty. Commonly used imaging modalities and protocols may be insufficient in diagnosing calcification. If tendon calcification is suspected, consideration may be given to the use of gradient-echo sequences as a part of MRI imaging for definitive diagnosis and treatment optimization.

Calcific tendinitis is a cell mediated disease, characterized by the metaplastic transformation of tenocytes into chondrocytes, resulting in calcific deposits in tendons [1]. The progression of calcific tendinitis through a pre-calcific phase, calcification phase, stable phase, and resorptive phase has been well documented. Initially, vulnerable sites undergo cellular changes predisposing them to calcification in the pre-calcific phase.

This is followed by cellular secretion of chalky deposits in the calcification phase and a subsequent painless stable phase. The final resorptive phase is most painful and may last for weeks while the calcium deposit develops a toothpaste-like appearance [2]. Clinically, patients with calcific tendinitis may present with acute onset or chronic pain and restricted range of motion [3].

Calcific tendinitis is most commonly seen in the rotator cuff tendons of the shoulder; their incidence is as high as 2.7%, with approximately 35% occurring asymptomatically [3]. Calcific tendinitis has also been documented at the wrist, hip, thigh, knee, ankle, and foot [3]. Very few cases of calcific tendinitis of the patellar tendon have been documented. Calcification can be visualized on radiographic, ultrasound, and MR imaging but is typically non-specific. On radiographic imaging, calcific deposits may appear well defined (in the calcification phase) or translucent (in the resorptive phase). On ultrasound examination of the shoulder, these deposits usually appear hyperechoic in the calcification phase or isoechoic in the resorptive phase. Calcifications appear as vague regions of low signal on T1 and T2 MR imaging [4]. Tendon calcification can often be missed on standard imaging, and in very rare cases, may mimic tendon rupture [5].

We present here a rare case of severe patellar calcific tendonitis initially diagnosed as mucoid degeneration and partial tear of the patellar tendon after a sports injury. Three modalities of diagnostic imaging including ultrasound, radiographs, and MRI were unable to correctly diagnose calcific deposition. The diagnosis was made after surgical exploration.

A 51-year-old male with a BMI of 32 presented three weeks after injuring his left knee while playing tennis. The patient described pushing off with his left foot as he lunged forward for a ball and felt a sudden sharp pulling sensation at his anterior knee. Immediately following the injury, he felt soreness and pain and developed left knee swelling that night. Oral non-steroidal anti-inflammatories (NSAIDs) and ice helped minimally. He continued to have sharp anterior knee pain, inferior to the patella for multiple weeks. His pain worsened when weight-bearing, walking, or climbing stairs.

On examination, he had a mildly antalgic gait. He had mild effusion and popliteal cyst which had improved since his injury. Passive knee extension was full to 0 degrees without discomfort and flexion was 135 degrees with discomfort at the anterior aspect of the knee. The patient was tender to palpation over the patellar tendon. There was no tenderness to palpation along the medial or lateral joint lines. McMurray’s test was normal (tests for meniscal injury). The patient had 1+ translation with both Lachman and Anterior Drawer tests, a normal Posterior Drawer test and was stable to both Varus and Valgus stress (respective tests for anterior, posterior, lateral, and medial ligamentous injuries). The patella was stable without apprehension and painless with the patellar grind test (evaluates for patellar chondral injury).

The patient completed left knee 4-view radiographs 8 days post injury (Image 1). There was no indication of fracture or dislocation. A diagnostic ultrasound was performed which showed partial tearing of the patellar tendon with small, marginal osteophytes at the inferior aspect of the patella. The patient completed a six sequence, closed, 3 Tesla MRI 21 days post-injury (Image 2).

Gradient echo sequences were not performed. An interstitial tear of the patellar tendon was visualized. There was a thick ‘mucoid’ component 3.4 cm superior-to-inferior and 5 mm in diameter. There was mild fraying at the free edge body of the lateral meniscus. 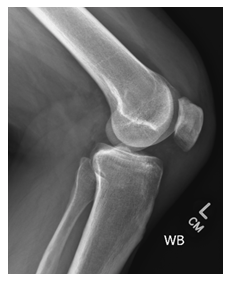 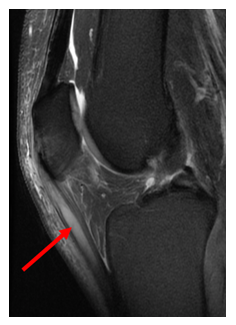 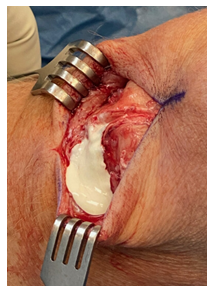 Image 3: Intraoperative image of anterior, vertical incision of the left knee. A large calcific deposit is seen draining from within the patellar tendon.

Surgical intervention was performed 45 days after initial complaint to explore and repair the patellar tendon tear after the patient had not improved with rest, activity modification, bracing, cryotherapy, or NSAIDs. Surgery included open patellar tendon anterior-posterior repair with removal of the calcific deposits and arthroscopic meniscal debridement. At arthroscopy, calcific deposits were seen and removed from the knee joint anterior to the ACL. A posterior horn tear of the medial meniscus and anterior horn tear of the lateral meniscus were debrided. The patellofemoral compartment and remaining cartilage in the knee were in good condition. A 10 cm midline incision was made, and a large inflamed prepatellar bursa was found along with thickening of the patellar tendon. Upon opening the patellar paratenon, there was a longitudinal split in the lateral side and thickening in the medial side of the tendon. The patellar tendon had calcific deposits under pressure which expelled from the tendon when opened (Image 3).

Degeneration and partial thickness tearing were found in the tendon. The tendon was debrided, and the calcific deposits were removed. The anterior and posterior layers of the tendon were sutured together. The longitudinal tear in the tendon was repaired using side-to side-suturing.

The patient was allowed to weight-bear as tolerated two weeks after surgery. Physical Therapy facilitated rapid return to full range of motion. By 8 weeks post-surgery, he was able to walk 5 miles and ride a stationary bike without limitations. His calcific deposits have not recurred.

Calcific tendonitis of the patellar tendon is an uncommon condition that has not been well documented thus far [5, 6]. X-ray, MRI, and ultrasound are often used in evaluating knee injuries, however these imaging modalities and protocols may be insufficient in diagnosing calcific tendonitis. Calcific tendonitis is typically seen as a loss in signal intensity on standard MRI sequences, however these sequences pose diagnostic difficulty due to the low number of resonating protons in calcium deposits [4]. As a result, alternative MRI imaging techniques such as susceptibility weighted imaging (SWI) and gradient echo sequences (GREs), have been considered [7]. Typical MRI sequences consist of spin echo sequences such as T1-weighted sequences and T2-weighted sequences in which tendons are visualized as low signal intensities. GREs, however, visualize tendons with high signal intensities due to shorter echo times in comparison to spin echo sequences [8].

GREs are particularly useful in detecting calcific tendonitis as these sequences reveal positive phase shifts which are absent on standard MR imaging [9]. As a result, these imaging techniques can be used to detect calcific tendonitis which is not seen on x-ray, ultrasound, and standard MRI. However, GREs have been shown to be susceptible to signal artifacts [10]. The presence of air/tissue boundaries or metal implants limit the diagnostic ability of GREs due to the presence of void signals and susceptibility artifacts. These challenges have resulted in limited use of GREs for imaging tendons despite their increased sensitivity for calcium deposition.

The typical treatment for calcific tendinitis consists of physical therapy, NSAIDs, cortisone injections, or surgery [11]. Surgery is typically recommended if the patient fails conservative management or if there is a significant tendon tear. Standard surgical procedures include calcific deposit removal, bursectomy, and tendon repair [12].

In our case, the patient failed conservative treatment including bracing, cryotherapy, and oral NSAIDs and had pain and difficulty with activities of daily living for six weeks. The patient underwent surgical intervention with a successful outcome.

Calcific tendinitis of the patellar tendon is an unusual condition that can present diagnostic difficulty. Commonly used imaging modalities and protocols may be insufficient in diagnosing calcification. Although rare, patellar tendon calcific tendonitis may be better visualized with GRE MRI sequences for improved preoperative understanding of treatment and expected outcomes.

The authors have no financial disclosures or conflicts of interest to declare.

Institutional review board approval is not required for a deidentified single case report. Informed consent was obtained from the patient for the publication of this case report.