Bioabsorbable Pins Versus Stainless Steel Kirschner Wires in Fixation of the Chevron Osteotomy for Treatment of Hallux Valgus Deformity: A Prospective Randomized Study with 2-Year Follow-up

Purpose: The purpose of this study was to prospectively evaluate the outcome of fixation of chevron osteotomy for treatment of hallux valgus deformity with bioabsorbable pins and stainless steel Kirschner wires.

Materials and Methods: A total of 112 patients (134 feet) with mild-to-moderate hallux valgus deformity treated with either bioabsorbable pins or stainless steel K-wires were included in the study between February 2010 and June 2016. At follow-up, patients were objectively and subjectively assessed to estimate the first intermetatarsal angle (IMA), hallux valgus angle (HVA), time to bony union and complications.

Results: There was no significant difference between the 2 groups in terms of radiographic findings and main clinical outcomes by use of American Orthopaedic Foot and Ankle Society (AOFAS) scores. Pin migration or prominence, however, was the predominant complication in patients with stainless steel K-wires.

Conclusions: Bioabsorbable pins and stainless steel K-wires used for fixation of the chevron osteotomy for treatment of hallux valgus deformity are similarly successful up.

Hallux valgus is one of the most common foot disorders in civilized populations [1], accounting for 33% of adults in shoe-wearing populations having some degree of this condition [2]. During the past century, more than 130 procedures have been described in the literature for correction of hallux valgus deformities [3]. A variety of bony procedures is often used for its correction, including osteotomies located at the head, midshaft, and base of the metatarsal, as well as arthrodesis of the first metatarsocuneiform joint [4, 5, 6]. Distal metatarsal chevron osteotomy is one of the commonly used methods and indicated for correction of mild-to-moderate hallux valgus, employed first by Austin in 1962 and later described by Austin and Leventen [7]. Stabilized by impaction of the cancellous fragments in the past, the classic chevron osteotomy has been modified to better accommodate internal fixation using metal screws with or without plates, K-wires, staples, as well as bioabsorbable pins and screws [8-25].

Bioabsorbable materials have been used for years in orthopaedic surgery and traumatology [26, 27]. Pins and screws manufactured from these materials have been used with good results in the treatment of ankle fractures [28-35], while bioabsorbable plates for cranio-maxillofacial and mandibular fractures and osteotomies [36-43]. Although distal chevron osteotomy in the treatment of hallux valgus deformity has been reported with good clinical and radiographic outcomes, the procedure is related to several complications including painful tissue irritation, loosening of hardware, secondary removal procedure, or pin tract infection, associated with metallic fixation [9, 12, 13, 15, 16, 20, 22, 24, 44, 45]. David S. Caminear et al demonstrated that a 2mm diameter oriented 82:18 PLLA(Poly-L-lactic acid)/PGA(Polyglycolic acid) copolymer pin, applied to fixate a distal chevron first metatarsal osteotomy, provided clinically relevant hallux valgus correction that was comparable to that provided by other forms of fixation, both metallic and bioabsorbable [46].

The purpose of this study was to prospectively evaluate the outcome of fixation of chevron osteotomy for treatment of hallux valgus deformity with bioabsorbable PLLA pins and stainless steel Kirschner wires.

Between February 2010 and June 2016, a consecutive series of 112 patients (134 feet) with mild-to-moderate hallux valgus underwent a chevron osteotomy followed by fixation with either bioabsorbable pins or stainless steel K-wires. All surgeries were performed at a single academic institution. The preoperative planning included a detailed history and clinical and radiological examination (Figure 1). HVA and IMA on the plain film radiographs were measured. We excluded those with HVA>40°, IMA>20°, degenerative changes and stiffness of the first metatarsaophalangeal joint (MTPJ).

All patients underwent routine chevron osteotomy surgical preparation in supine positioning with legs separated for a better position under either general or spinal anesthesia. A tourniquet was applied at the thigh level. A dorsomedial longitudinal incision, beginning over the first MTPJ, was used to expose the underlying metatarsal head. This was followed by capsule exposure and removal of the medial eminence of the first metatarsal head. After a 60° V-shaped horizontal osteotomy centered in the head was created, the capital fragment was displaced laterally approximately 4 to 5 mm, but no more than 40% to 50% of the width of the metatarsal, and then impacted onto the metatarsal shaft. Two 2.0 mm K-wires were obliquely inserted across the osteotomy site, one beginning dorsomedially and far enough proximally on the first metatarsal shaft and neck of the first metatarsal, and another at the plantar aspect. In K-wire group, both wires were then cut flush to the proximal fragment. In bioabsorbable pin group, however, one of the K-wires was removed prior to replacing the 2 mm bioabsorbable PLLA pin (Buhung, Pyongyang, D. P. R of Korea) through the tract created by the K-wire. The second bioabsorbable pin was also replaced instead of the other K-wire. The portion of the pins that protruded was removed with an oscillating saw to be flush with the metatarsal surface. Removal of the medial projection of the metatarsal on the proximal side of the osteotomy and medial capsulorrhaphy were followed.

Postoperatively, patients were allowed to weight bear as tolerated in a slipper cast, followed by a stiff shoe for an additional 2 to 4 weeks, and then advanced to comfortable shoe wear. Full weight bearing in a regular shoe was permitted on a basis of radiographic findings of bony union at the osteotomy site. Patients were evaluated clinically according to the AOFAS score and radiographs of the forefoot were taken to measure HVA and IVA, and determine the time to bony union regularly at 2, 4, 8, 12, 24 weeks and every 6 months (Figure 2). In addition, revision rate and postoperative complications at follow-ups for 2 years were obtained. 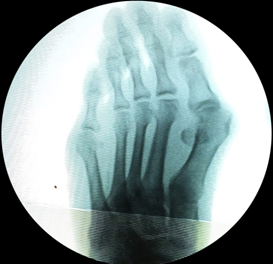 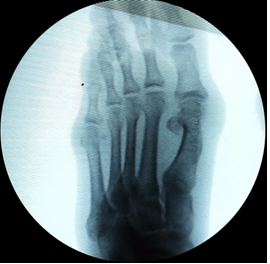 Of 54 patients (63 feet) treated with bioabsorbable pins, 4 cases were males and there were 6 males in the K-wire group. 22 patients had bilateral bunions. Mean age was 45.3 years (ranged from 23 to 61) and the duration of follow-up was 2 years. None of the patients were lost to the follow-up.

In terms of pain, at last follow-up, 4 patients (5 feet, 7.9%) treated with bioabsorbable pins complained of moderate pain. However, in the K-wire group, mild to moderate pain developed in 10 patients (12 feet, 16.9%) due to metallic pin migration or prominence. The mean AOFAS scores were significantly increased from 58.3 ± 3.9 and 60.4 ± 5.8 to 86.4 ± 4.9 and 88.1 ± 5.5 in the bioabsorbable pin and K-wire groups. These scores revealed there were significant differences between preoperative and postoperative values in the both groups (p<0.001), however, no statistical difference in the pre- and postoperative values between the 2 groups (p>0.05). There was no avascular necrosis of the metatarsal head after osteotomy union was achieved.

Postoperative complications included 3 (3 feet, 4.8%) superficial infections and 1(1 foot, 1.6%) deep infection in the bioabsorbable pin group and the infected patients were healed with antibiotics and dressing, while 3(3 feet, 4.2%) skin breakdowns due to K- wire protrusion on the dorsal plane developed in the K-wire group, with one patient (1 foot, 1.4%) requiring revision surgery and the implants were removed. Loss of fixation at the chevron osteotomy occurred in 2 patients (2 feet, 3.2%) resulted from bioabsorbable pin failure at 4-8 weeks before achievement of bony union at the osteotomy site, which required revisions. Revision rate was 3.2% in the bioabsorbable pin group higher than 1.4% in the K-wire group. Of 58 patients (71 feet) underwent with K-wires, in 18 cases (22 feet, 31.0%), the K-wires were removed at a mean of 12 weeks (ranged from 10 to 15) postoperatively.

Bioabsorbable fixation of bone in osteotomies, arthrodesises, and in other reconstructive orthopedic surgery is valuable, as metallic fixation can never be an ideal fixation modality, due to corrosion, stiffness, and stress shielding [47]. Poly-L-lactic acid has a resorbable half-life of approximately 6 months [48] and complete reabsorption should take place in approximately 3 to 5 years [49]. This characteristic provides several advantages over the more rapid resorption of other resorbable polymers. First, this allows the bioabsorbable orthopaedic implant to retain its fixation strength until well after biologic healing is complete [50]. Second, there is a very gradual decline of strength over time, which allows for a similar slow decrease in stress shielding that is transferred to the biologic healing process [47]. Some studies have found that the use of bioabsorbable pins in hallux valgus surgery has several advantages, including decreased risk of bacterial colonization, as is often the case when K-wire fixation protrudes through the skin. In addition, by using bioabsorbable material, there is no need for a second operation to remove hardware that may become symptomatic [13, 15, 45, 51, 52].

In our study, all of the patients in either bioabsorbable pin or Kirschner wire group had mild-to-moderate hallux valgus deformity, which was well within the indications of the distal chevron osteotomy [6, 7, 10, 53]. We observed no significant differences in the preoperative and postoperative IMAs, HVAs and the time to bony union between the 2 groups (p>0.05), which demonstrates that fixation by either PLLA pin or metallic K-wire is enough to mainstay and heal the chevron osteotomy site. Although fixation of the chevron osteotomy with PLLA pins resulted in similar IMAs and HVAs in the both groups, we found a high incidence of postoperative pain in the patients treated with K-wires compared to those in the PLLA pin group, due to their migration and prominence.

A third advantage of the slow resorption of PLLA is its low incidence of inflammatory reactions and it is likely due to the slow rate of degradation [54]. As regards the postoperative complications, infection rate was 6.4% in the bioabsorbable pin group and it is thought due to foreign body reaction. Meanwhile, 4.2% of skin breakdowns directly related to K-wire protrusion on the dorsal plane developed in the K-wire group. Similar rates of infection in the both groups suggest that bioabsorbable PLLA pins can be used in fixation of the chevron osteotomy for treatment of hallux valgus deformity, instead of metallic K-wires. A potential complication with using bioabsorbable materials is occasional breakage [55, 56]. In this study, bioabsorbable pin failure by a motor vehicle accident and a fall from height caused loss of fixation of the osteotomy site in 2 patients (2 feet, 3.2%) at 4-8 weeks requiring revisions. This implies care should be taken before bony union with patients treated with bioabsorbable PLLA pins.

Other factors analyzed in this paper were revision and removal of metalwork. As mentioned above, revision rate was 3.2% in the bioabsorbable pin group higher than 1.4% in the K-wire group. When conventional metallic fixation implants are used, the need for secondary hardware removal is typically not considered to be a complication [57]. In 18 cases (22 feet, 31.0%) of the K-wire group, however, the implants were removed at a mean of 12 weeks (ranged from 10 to 15) postoperatively to avoid problems related to pain and discomfort. A total of 19 patients (23 feet, 32.4%) had secondary operations in the K-wire group; in contrast, only 2 patients (2 feet, 3.2%) with PLLA pins required revisions.

Clinical advantages of PLLA pins are that they are bioabsorbable and are degraded into nontoxic products, and do not need further surgical procedures related to removal of them. They provide strength enough to mainstay and heal the osteotomy site during the bony union.

Our study has some limitations that the number of patients is relatively small and the follow-up may not be long enough. Other investigations such as patient satisfaction questionnaires and recurrence during long-term follow-up could be performed in future studies.

Bioabsorbable PLLA pins can provide clinical results similar to those of stainless steel K-wires when used in fixation of the chevron osteotomy for treatment of hallux valgus deformity.