6Medical Biology Department of the Faculty of Medicine Antananarivo, Madagascar

Methods: It is a prospective study of 69 strains of Staphylococci in a period of six months from January 2019 to June 2019 in the University Hospital of Befelatanana.

It is a prospective study of 69 strains of Staphylococci in a period of six months from January 2019 to June 2019 in the University Hospital of Befelatanana. In the beginning, the isolates were identified according to appearance, odor and color of bacterial colonies. Then, the identification of Gram-positive cocci on microscopic examination and the positivity of catalase confirms the diagnosis of Staphylococcal infection. For the diagnosis of Staphylococcus aureus infection, we performed 2 tests simultaneously. The first test is the inoculation of the strain on the baird-parker culture medium. The second is the coagulase test. Both tests require incubation at 37°C in an oven for 24 hours. The identification on baird-parker culture medium represents the gold standard test [5-8]. But this test requires several conditions that make it more difficult to perform compared to the coagulase test. Indeed, a petri dish by strain is necessary for the test. In addition, we need to buy a box of baird-parker culture medium that is quite expensive. Finally, the egg yolk tellurite emulsion must be used, which will be mixed with the baird-parker agar during the preparation of the culture media. The egg yolk tellurite emulsion is necessary for the good growth of Staphylococcus aureus strains. Indeed, strains of Staphylococci will reduce tellurite that will become a black tellurium causing a black staining of staphylococci colonies. Similarly, there is proteolysis of egg yolk proteins, resulting in a clear (transparent) halo around the colony. The presence of this halo is specific to strains of Staphylococcus aureus (Figure 1 and 2). Concerning the coagulase test, we can simply put in a glass tube a few milliliters of citrated plasma and put some bacterial colonies therein. After 24 hours incubation in the oven, the positivity of the test shows the appearance of coagulum in the glass tube. This test shows that the bacterial strain present in the tube possessed an enzyme, coagulase, which is characteristic of strains of Staphylococcus aureus. Study parameters were age, gender, clinical information, hospitalization departments, baird-parker and coagulase test results. For ethical reasons, the authorization of the director of the establishment was obtained before the data were collected in the registers. The seizure was done anonymously to maintain confidentiality. The statistical significance threshold used was p=0.05. 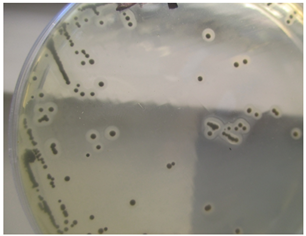 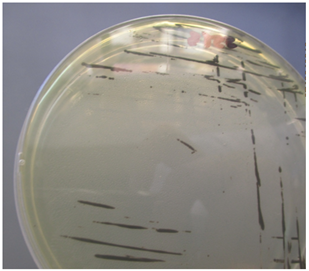 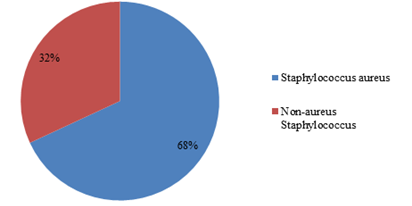 Regarding the performance of the catalase test, this study showed a specificity and a positive predictive value of 100%. Thus, there is never a false positive in the identification of strains of Staphylococcus aureus. Similarly, the coagulase test will never make a diagnostic error. Thus, this result makes it possible to properly adjust the treatment corresponding to the germ and the patient is taken care of properly. On the other hand, the coagulase test is not 100% sensitive and the negative predictive value is lowered. This situation is probably due to the citrated plasma used for the coagulase test. In fact, we use citrated plasmas from patients hospitalized in the hospital or patients doing a health check. Thus, some citrated plasmas may contain few coagulation factors due to diseases presented by patients. And the result of the coagulase test can be falsely negative. Thus, we propose the use of citrated plasma of patients whose coagulation tests are normal (time of Quick and Activated Cephalin Time). The dosage of other coagulation factors should be made if possible. In short, in case of negativity of the coagulase test, we can compare the bacteriological result with the factors associated with the bacterial infection. And if in doubt, we can repeat the catalase test using another citrated plama.

Concerning the associated factors, men and elderly subjects are most affected by Staphylococcus aureus infection without significant difference. Thus, Staphylococcus aureus infections can affect both genders without distinction. However, the high frequency of older subjects in this study may be due to their higher vulnerability and their greater immune deficiency [10]. This immunodeficiency will allow the germ to become more virulent resulting in the appearance of the infection. Concerning the department and the clinical information, patients hospitalized in the departments of resuscitation and presenting with suppurations are the most affected by Staphylococcus aureus with a very significant difference. These cases are mainly represented by patients with postoperative suppurations in the intensive care unit. Other studies have also found a high prevalence of Staphylococcus aureus infections in the suppurations [11-12]. A study carried out at the Niamey hospital found a prevalence of 31% of Staphylococcus aureus strains in surgical site infections [13]. Contamination of the surgical site most often occurs during the operating period, either caused by the patient's flora present before the incision, either by the flora of the staff or by the antiseptic solutions or the contaminated instruments [14].

The results of this study showed that the coagulase test can replace the baird-parker test which is more difficult and more expensive to perform. Even if the baird-parker remains the reference method for the identification of Staphylococcus aureus strains [5-8], all laboratory can used the coagulase test to identify these strains. And in case of doubt, technicians can verify the reliability of the results by comparing the bacteriological result with the factors associated with the patient's infection. Similarly, the coagulase test can be redone while respecting pre-analytical conditions.

This study highlighted the possibility of using only the coagulase test in the identification of Staphylococcus aureus strains. Indeed, this test showed a good result from the point of view of sensitivity and specificity compared to the baird-parker test which is the reference method. Similarly, laboratory technicians can compare bacteriological findings with factors associated with the bacterial infection presented by the patient. The coagulase test is an easy-to-use test and does not require a lot of reagents and consumables. The use of the coagulase test will reduce expenditure in laboratories in developing countries and reduce the cost of bacteriological examination. Thus, the patient will be treated properly and his life expectancy will be improved.

The authors do not declare any conflict of interest.