Staph. aureus (Staphylococcus aureus) is a leading cause of nosocomial infections worldwide and causative agent of a wide range of diseases. Many of these diseases, including endocarditis, osteomyelitis, and foreign body associated infections, appear to be caused by biofilm-forming Staph. aureus [1,2]. According to some study reports, over 65% of hospital-acquired infections occur by the infecting organisms that have the ability to biofilm production [3].

The biofilm formation is accompanied by the production of extracellular polymer and adhesion matrix and leads to fundamental changes in the bacterial growth and gene expression [4]. There are various definitions for biofilm but all of them consider three major components for it: microbes, slime exopolysaccharide and surface, removing any of them can stop producing biofilm [5].

Susceptibility to antibiotics in bacteria that are protected by biofilm is reduced because antibiotics are prevented to reach the bacteria surrounded by biofilm. Furthermore biofilm keeps bacteria out of reach of host immune defense mechanism and often resulting in persistent infections that are difficult-to-treat and life-threatening due to emergence of multidrug resistance strains and also occurrence of isolates that are able to form strong biofilms [6, 7, 8].

A large number of studies have shown that bacterial quorum sensing (QS) signaling plays important roles in biofilm production [9, 10]. The QS system of the staphylococci is called the accessory gene regulator or “agr” system. QS via agr increases production of virulence factors, which include various enzymes and toxins. Moreover, agr dysfunction is correlated with persistent Staph. aureus bacteremia [11].

There has been continued interest in the agr for the development of anti-staphylococcal drugs [12].Combining use of antibiotic with an anti-QS agent is the most effective clinical strategy for the treatment of bacterial diseases at present [13, 14]. In this study, we investigate the prevalence of agr groups in Staph. aureus isolates obtained from pus, wound swab and blood samples.

This study seeks to determine drug resistance pattern among the biofilm forming Staph. aureus isolated from the patients of Dhaka Medical College Hospital with prevalence of quorum sensing genes among them by PCR assays.

This Cross sectional study was conducted from 1 January 2019 to 31 December 2019 in the Microbiology laboratory of Dhaka Medical College Hospital, Dhaka, Bangladesh.

Samples were collected from pus, wound swab and blood of clinically suspected infected patients of inpatient departments of Dhaka Medical College Hospital or were received in the microbiology department for culture and sensitivity after taking informed written consent irrespective of age, sex and antibiotic intake. Patient who did not give consent were excluded from this study. Staph. aureus were identified by Gram staining, catalase test, coagulase test (slide and tube method), colony morphology, hemolytic property, pigment production and mannitol fermentation test in mannitol salt agar media as per standard procedures [15].

Biofilm formation by these isolates was detected by two in vitro methods: tissue culture plate method and tube method [16, 17].

The organisms were inoculated in 10 mL of trypticase soya broth (TSB) with 1% glucose at 37°C or 24hours. The cultures were then diluted 1:100 with fresh medium and individual wells of sterile 96 polystyrene tissue culture plates were filled with 200 μl of the diluted cultures. Negative control wells contained inoculated sterile broth. The plates were incubated for 24 hours at 37°C. The wells were gently washed four times with 0.2ml of phosphate buffered saline (PBS) (PH 7.2), fixed by sodium acetate (2%) and stained by 0.1% crystal violet. Excess stain was removed by deionized water, and the plate was kept for drying. The optical density at 570nm (OD570) was determined using a micro-ELISA auto-reader assay. The experiment was performed in triplicate and repeated three times.

The average OD values were calculated for all tested strains and negative controls, since all tests were performed in triplicate and repeated three times. Second, the cut off value (ODc) was established. It was defined as three standards (SD) above the mean OD of the control: ODc = average OD of negative controls + (3 × SD of negative control). Final OD value of a tested strain was expressed as average OD value of the strain reduced by ODc value (OD = average OD of a strain – ODc). ODc value was calculated for each microtiter plate separately. If a negative value obtained, it should be present as zero, while any positive value indicates biofilm.

TSB with 1% glucose (10ml) was inoculated with loopful of microorganism from overnight culture plates and incubated for 24 hours at 37°C. The tubes were decanted and washed with PBS (pH 7.2) and dried. Dried tubes were stained with crystal violet (0.1%). Excess stain was removed and tubes were washed with deionized water. Tubes were than dried in inverted position and observed for biofilm formation. Biofilm formation was considered positive when a visible film lined the wall and bottom of the tube. Experiments were performed in triplicate and repeated three times. The adherence property of biofilm producers was graded as strong, moderate and weak and non-biofilm producer.

Staph. aureus ATCC 25923 was used as control strain to assess the performance of the method.

SPSS software (version 25) was used for data analysis. Chi-square test was used for analysis of categorical data. P value of < 0.05 was considered significant.

A loop full of bacterial colonies from MHA media was inoculated into a microcentrifuge tube containing TSB. After incubation overnight at 37°C, the tubes were centrifuged at 4000 g for 10 minutes at 4°C and the supernatant were discarded and then the tubes containing bacterial pellets were kept at -20°C as pellets until DNA extraction.

300 µl distilled water was mixed with bacterial pellet and was vortexed until mixed well. The mixture was kept in block heater (DAIHA Scientific, Seoul, Korea) at 100°C for 10 minutes for heating. After heating the tube was immediately kept on ice for further 5 minutes and then centrifuged at 14000 g at 4°C for 10 minutes. Finally, supernatant was taken into another microcentrifuge tube and was used as template DNA for PCR. Extracted DNA was preserved at -20°C for future use.

2.6.3. Mixing of master mix and primer with DNA template

Primers were diluted with Tris-EDTA (TE) buffer according to manufacturer’s instruction. PCR was performed in a final reaction volume of 25 µl in a PCR tube, containing 12.5 µl of master mix (mixture of dNTP, Taq polymerase, MgCl2 and PCR buffer), 1 µl forward primer and 1 µl reverse primer (Promega Corporation, USA) 2 µl extracted DNA and 10.5 µl of nuclease free water. After a brief vortex, the PCR tubes were centrifuged in a microcentrifuge for few seconds.

PCR products were detected by electrophoresis on 1.5% agarose gel was prepared with 1X TBE buffer (TrisBorate EDTA). For 1.5% agarose gel preparation, 0.18 gram of agarose powder (LE, Analytical grade, Promega, Madison, USA) was mixed with 12.5ml TBE buffer. Mixture was boiled for few minutes to dissolve and cooled to 60-70°C. A comb was placed in gel tray and poured the agarose gel. After solidification, comb was removed and 6µl of amplicon was mixed with 1µl loading dye on para film and then loaded into the well of agarose gel. 2 µl of DNA ladder was mixed with 1µl loading dye and was loaded into one well. Gel containing amplicon and DNA ladder were then placed on the electrophoresis tank having 1X TBE buffer for 35 minutes at 100 volts. Positive control and negative control was also loaded in separate well.

2.6.7. Visualization and interpretation of results

The gel was observed under UV Trans-illuminator (Gel Doc, Major science, Taiwan) for DNA bands. The DNA bands were identified according to their molecular size by comparing with the molecular weight marker (100 bp DNA ladder) loaded in a separate lane. Samples showing the presence of corresponding bp band were considered positive for the presence of that organism.

For sequencing of bacterial DNA, purification of amplified PCR product was done by using DNA purification kit (FAVOGEN, Biotech Corp). Purified PCR products of Staph. aureus were sent to 1st Base Laboratories, Malaysia for sequencing by capillary method (ABI PRISM 3500). BLAST analysis was performed to search for homologous sequences into the Gen Bank at www.ncbi.nlm.nih.gov.

Table I: Detection of biofilm producers by TM and TCP method among isolated Staph.aureus. (N= 45)

Table II: Screening of the isolates of Staph. aureus for biofilm formation by TCP method and TM.(N= 45) 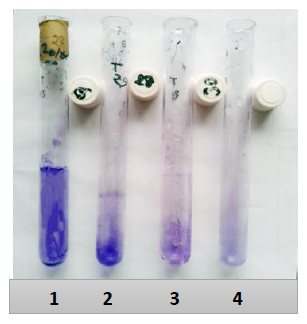 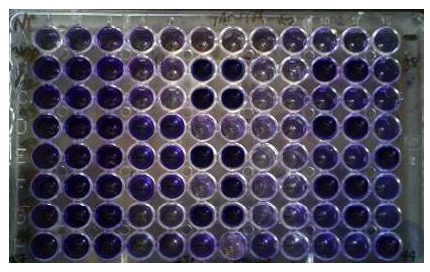 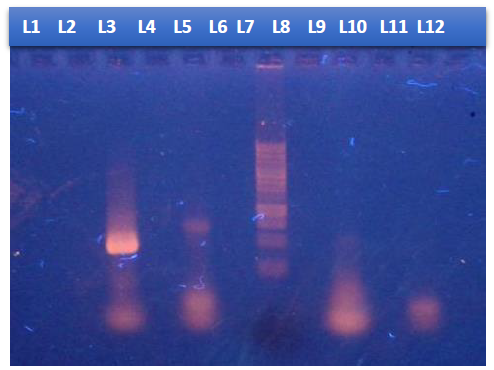 Staph. aureus is the leading cause of biofilm-mediated life threatening infections, as biofilm production influences the efficacy of antibiotic therapy [2].

In the present study, 11.11% of the Staph. aureus were highly virulent showing strong adherence, 28.89% , 31.11% and 28.89% showing moderate, weak and non-adherence, respectively. This finding was almost similar to the related previous studies [27, 28]. Environmental factors like sugars (glucose or lactose) or proteases present in the growth medium, surface area, type of surface (rough/smooth), and porosity, charge of the surface and the genetic makeup of the Staph. aureus isolate affect biofilm formation [29].

In our study, 46.88% biofilm-producing Staph. aureus were resistant to ampicillin. A previous study reported that 86.7% biofilm-producing Staph. aureus were resistant to ampicillin which was much higher than the present study [27]. The higher resistance of isolates to ampicillin may be attributed to the fact that it is the commonly used antibiotic for treatment of skin and nasal infections [33]. Differences in the antibiotic resistance patterns varies widely between different geographic regions. Many factors contribute to those patterns including local infection control programs implemented, antibiotic prescribing policies, epidemiology of the studied strains themselves and uncontrolled use of antibiotic in agriculture and livestock [34, 35].

In the present study, the total number of QS genes among 32 biofilm producing Staph. aureus isolates were 26(81.25%). Similar previous study reported that 50.82% QS genes were detected [36]. In this current study, among 32 biofilm producing Staph. aureus a majority (46.88%) of isolates belonged to agr-I, followed by agr-III (21.88%), agr-II (6.25%), and agr-IV (6.25%). This finding was nearly close to the previous studies [37, 38]. Another study reported that agr-II was the predominant one which was isolated from milk [39].This difference of obtained results may be due to differences of geographical location and source of isolation [36].

DNA sequence of amplified PCR product and translated nucleotide base sequence of agr-I showed point mutations and deletion including base substitution at multiple positions. Large and small deletions are the main source of gene-inactivating mutations followed by insertions/duplications and a considerable number of point mutation had been detected, including truncation by nonsense and missense mutations [40, 41].

In terms of the annual burden of morbidity and mortality it imposes on society,Staph. aureusis potentially the most significant bacterial pathogen. This is particularly so in the case of chronicStaph. aureusbiofilm infections. Staph. aureusis a clinically relevant pathogen due to its antimicrobial resistance and evasion of the host immune system [42]. So, biofilm detection may be included in routine laboratory tests for the better management of chronic or device associated infections.

The resulting information would be very helpful for finding association of chronic Staph. aureusbiofilm infections with agr specific types as well as in targeting agr for the development of anti-staphylococcal drugs.

The clinical isolates of Staph. aureus of hospitalized patients exhibit a high degree of biofilm formation. We can conclude from our study that TCP is a reliable method to detect biofilm forming microorganisms. TCP method can be recommended as a routine test for detection of biofilm producing bacteria in laboratories.

Higher rate of antimicrobial resistance is demonstrated by non-biofilm producers than biofilm-producers. Although biofilm-positive strains have a higher tendency to show resistance to oxacillin, cefoxitin, ampicillin compared to biofilm-negative strains but not statistically significant (>0.05).

Among biofilm-producing Staph. aureus agr-I gene was predominant than other agr genes.

The author is thankful to all the teachers and staff of Microbiology department, Dhaka Medical College, Dhaka. This study was partially funded by Bangladesh Medical Research Council (BMRC).

There is no conflict of interest.