Introduction: MPA (or microscopic polyarteritis) is clinically described as patients with exclusively nongranulomatous small vessel vasculitis involving the upper or lower respiratory tract (e.g., alveolar capillaritis). The most common manifestation of MPA is necrotizing glomerulonephritis and/or pulmonary capillaritis. Serologically, more than 90% of MPA patients have a positive antineutrophil cytoplasmic antibodies (ANCA). There have been selective case reports documenting pancytopenia associated with vasculitis.

Case: Here, we discuss a 56 year old female patient who presented with pancytopenia, and was found to have biopsy-proven small vessel vasculitis with negative ANCA. She presented with 5-6 weeks of worsening generalized fatigue, cough with hemoptysis, intermittent fever, and shortness of breath on exertion and weight loss of 8lbs over this time. On presentation, she was febrile (102F) and found to have pancytopenia, with normal kidney function. She was admitted to the Intensive Care Unit for a presumed viral illness and underwent a bone marrow biopsy for evaluation of pancytopenia. Further imaging with computerized tomography (CT) scan demonstrated ground glass haziness. Bone marrow biopsy revealed normal results. She was discharged with the diagnosis of a pancytopenic viral illness. She returned 4 weeks later with worsening of her symptoms. CT chest showed significant interval changes compared to previous CT with bilateral ground glass opacities. Lung biopsy was performed which showed small vessel vasculitis. Repeat CT chest following steroid treatment demonstrated significant improvement.

Discussion: To our knowledge, this is the first reported case of pancytopenia in small vessel vasculitis not associated with lupus. In cases of MPA, 96% are ANCA positive. However, this patient fits into the criteria of ANCA-negative vasculitis. Although ILD is an uncommon presentation of MPA, there have been an increasing number of cases citing association of vasculitis with ILD. In conclusion, vasculitis associated with pancytopenia continues to be poorly understood. ANCA negativity at the time of presentation can give a false sense of security and delay treatment.

Small-vessel vasculitis has been categorized as granulomatosis with polyangiitis (GPA), microscopic polyangiitis (MPA), eosinophilic granulomatosis with polyangiitis and pauci-immune glomerulonephritis. MPA (or microscopic polyarteritis) is used to describe patients with exclusively nongranulomatous small vessel vasculitis involving the upper or lower respiratory tract (e.g., alveolar capillaritis). Pathologically it is a pauci-immune necrotizing vasculitis affecting small vessels, with or without involvement of medium-sized arteries [1].

The American College of Radiology (ACR) criteria for small-vessel vasculitis include the following:

The presence of two or more of these four criteria yielded a sensitivity of 88 percent and a specificity of 92 percent. Since the ACR did not establish specific criteria for MPA, these criteria did not discriminate GPA from either MPA nor non-vasculitic diseases that can mimic GPA [2]. The most common manifestation of MPA is necrotizing glomerulonephritis and/or pulmonary capillaritis. Serologically, more than 90% of MPA patients have a positive antineutrophil cytoplasmic antibodies (ANCA) [3].  Here, we discuss a 56 year old female patient who presented with pancytopenia, and was found to have biopsy-proven small-vessel vasculitis with negative ANCA.

A 65 year old woman with a past medical history of Antiphospholipid Antibody (APLA) syndrome, partial-seizure disorder, hypertension and dyslipidemia  presented with worsening generalized fatigue, cough with hemoptysis, intermittent fever, shortness of breath on exertion and weight loss of 8lbs over a period of five to six weeks. She had been prescribed warfarin for APLA, however, she had not been compliant with regular INR measurements. She was sent to the emergency room by her primary physician. On presentation to the hospital, she had a fever of 102oFarenhiet (orally) and a normal physical exam. Laboratory findings on admission were present in Table 1. Chest x-ray (CXR) revealed bilateral upper lobe opacities of unspecified etiology. Further imaging with computerized tomography (CT) scan demonstrated ground glass haziness and interstitial septal thickening with 6mm and 5mm ground glass nodules in the left lung base. An echocardiogram performed was normal. Patient was admitted to the Intensive Care Unit for a presumed viral illness and underwent a bone marrow biopsy for evaluation of pancytopenia, which showed only some mild hypercellularity. Serological studies performed in the ICU were present in Table 2. After her hospital stay, her symptoms improved with conservative management. Her illness was presumed to be viral and she was discharged to follow up with an out-patient hematologist. Patient followed up in out-patient clinic, where she was found to have persistent pancytopenia and worsening fatigue. She was sent to the emergency room and found to have bilateral rhonchi, with hypoxia. Additionally, she was pancytopenic with hemoglobin of 6.2 g/dl and a platelet count of 10 K/ul. CT chest showed significant interval changes compared to previous CT with bilateral ground glass opacities. She was started on broad spectrum antibiotics and was admitted to the ICU, where she received transfusions of packed red blood cells (PRBC) and platelets. Over the course of her stay, she developed respiratory distress and had to be intubated. Bronchoscopy was performed and specimens were sent for microbiology and cytology, which did not reveal any significant findings, including tuberculosis. The laboratory findings over her ICU stay are presented in Table 3. The Patient continued to receive broad-spectrum antibiotics, including anti-fungals, in addition to intravenous steroids. Lung biopsy was performed which showed small-vessel vasculitis. Repeat CT chest following steroid treatment demonstrated significant improvement. Currently, the patient was followed up at a 6 month interval post discharge. She experienced repeated exacerbations in her symptoms with similar presentation which resolved using immunosuppressants (cyclophosphamide and rituximab) and plasmapheresis. She has now decided to pursue further treatment at an out-side hospital. 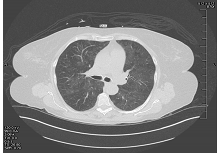 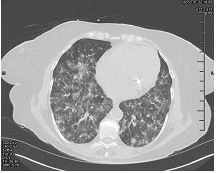 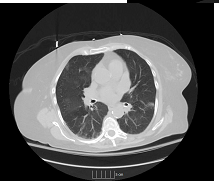 Vasculitis has historically been associated with ANCA-positivitiy and rarely with interstitial lung disease and pancytopenia. There have been selective case reports documenting pancytopenia with vasculitis, interstitial lung disease with vasculitis and ANCA-negativity with vasculitis. Despite extensive research, we were unable to find a single case report of a patient presenting with ANCA-negativity, interstitial lung disease and pancytopenia. This patient had a negative double-stranded DNA (ds-DNA) and presented with pancytopenia which is an unusual presentation. The chief reason for admission of the patient discussed above was respiratory failure. Lung involvement is a common presenting finding of vasculitis.  It can initially manifest like idiopathic pulmonary fibrosis and precede the full-blown clinical manifestations and diagnosis of MPA by years [4, 5, 6]. Historically, the incidence of fibrosis in MPA has been insignificant. A study published in Arthritis and Rheumatism in 1999 reported the incidence of lung findings in MPA as 24%, the most common being alveolarhemorrhage (11.8%), pneumonitis (10.6%) and pleuritis (5.9%) [7]. The majority of these patients have a predominant myeloperoxidase-antineutrophil cytoplasmic antibodies (MPO-ANCA) positive pattern [7]. However, more recently, there have been an increasing number of studies recognizing pulmonary fibrosis in vasculitis. In 2016, a German study that followed the clinical course of small-vessel vasculitis found that in a series of 144 patients with MPA, 12% presented with fibrosing interstitial lung disease, which subsequently developed in 15% over the long term follow-up [8]. Fibrosing ILD was associated with a poor prognosis in this study. Interestingly, fibrosing ILD is more commonly associated with MPO-ANCA than with other subtypes [9, 10].  This is in contrast to our patient who, being ANCA-negative, presented with ILD.

It is unclear whether fibrosing ILD significantly impacts mortality in patients with MPA [4, 10, 11]. Cloe et al, as a part of a multicentric study, followed up with 49 vasculitis patients for 15 years and reported that chronic respiratory insufficiency was significantly associated with mortality, followed by induction therapy with glucocorticoids alone and initial weight loss. There was a significant three year mortality benefit in patients treated with an immunosuppressant as induction therapy [12]. Over the course of her hospital stay, our patient was found to have pancytopenia. Pancytopenia is a rare presentation of vasculitis. A case report of a 65 year old male patient published in 2007 linked multiple paraneoplastic syndromes consisting of pancytopenia leukocytoclastic vasculitis and hypertrophic pulmonary osteoarthropathy with non-small cell lung carcinoma [13]. The author attributed the pancytopenia in that case to the constellation of paraneoplastic syndromes. The only other case of pancytopenia in small-vessel vasculitis was of a patient with ANCA-positive vasculitis and was published in 2003 [14]. To our knowledge, this is the first reported case of pancytopenia in ANCA negative small-vessel vasculitis not associated with lupus. Immunodiagnostically, though the aforementioned patient was ANCA-negative, she was diagnosed with MPA based on her lung biopsy and clinical features. Although a positive ANCA test is strongly suggestive of vasculitis, false-positive and false-negative ANCA results may be seen [15]. ANCA-negative vasculitis patients tend to be younger at the time of diagnosis (mean age 50.0 years old) [3]. In a study done in 2017, 133 Korean patients with ANCA-associated vasculitis were classified into 3 categories: those with MPO-ANCA, anti-PR3 antibody (PR3-ANCA) and ANCA-negative vasculitis. It was found that patients with ANCA-negative vasculitis had the youngest mean age at diagnosis (50 years old) among the three categories [3]. Literature of cases citing ANCA-negative vasculitis have atypical presentations. A case report from the American Journal of Kidney Disease in 2002, reported a case about an African-American 11-year-old girl presenting with peri-orbital edema with an elevated creatinine and was found to have an increased ANA and anti-dsDNA titer with a negative ANCA. She was eventually diagnosed with lupus nephritis and ANCA-negative renal vasculitis [16]. A large multi-center study done in 1998 found that in MPA, the diagnostic sensitivity of enzyme-linked immunosorbent assay (ELISA) based tests namely anti-PR3 and anti-MPO were 26% and 58% respectively while the diagnostic sensitivity of the indirect immunofluorescence (IIF) based tests namely cANCA and pANCA were 23% and 58% respectively [17]. However, the multi-center study also found that when the results of the IIF tests were combined with those of the ELISA tests (cANCA/anti-PR3 positive, pANCA/anti-MPO positive), the diagnostic specificity increased to 99%. It is possible that the patient might have presented with ANCA-positivity if our team had used a combination of IIF and ELISA.

Vasculitis associated with pancytopenia continues to be poorly understood. ANCA-negativity at the time of presentation can give a false sense of security and delay treatment. Any worsening of condition on steroids warrants the use of immunosuppressants. However, this has not been required to date and our patient remains well without evidence of progression in our two month follow-up.