Various pathologies that lead to bone gaps of are difficult to manage and each presentation may require an individualized protocol of management. In the present case, the compound wedge fracture was initially sub-optimally managed leading to more complications, non-union, large collection of sequestrum and sepsis. This unique case required a complex management and salvage of the limb without damaging vital relations such as the nerves, muscles and blood vessels. After thorough assessment, a distraction osteogenesis procedure was recommended to restore the limb functions.

Distruction osteogenesis is a novel technique utilizing intramembranous ossification of bone to equalize discrepant limb lengths. It involves a low energy corticotomy and slow deliberate distraction of callus to fill large bone defects. In addition to equalizing limb lengths, destraction osteogenesis has successfully been used in maxillofacial cosmesis and orthopedic limb salvage [1]. The concept of intentional destruction followed by controlled healing process of bones can be traced back as early as 1905 [2]. Its main intention was to ensure healing while increasing the length of a bone whose original length was shortened by trauma or pathology. However; this concept fully resurged in orthopedics in early 1950s [3].

Initially, Destruction osteogenesis was only used in long bones (endochondral ossification), however, in early 1990s, McCarthy [4] successfully applied the procedure on short and irregular bones (intramembranous ossification). This led to its current applications in complex craniofacial surgeries and other cosmetic procedures. In addition, with the current technologies, distructive osteogenesis can successfully be applied in correcting congenital skeletal abnormalities [5].

Hippocrates, the father of modern medicine, documented a multidisciplinary treatise devoted to orthopedics. He described detailed gross anatomy of the vertebral column and pioneered the use of the ‘Hippocratic ladder’ to treat these injuries. There’s evidence supporting traditional bone setting in ancient Africa and China. There is archeological evidence of healed, well–aligned long bone fractures [6]. Guy de Chauliac, a prominent French surgeon, pioneered the use of isotonic traction to treat fractures of the femur. He utilized a system of pulleys, cords and suspended weights that ensured traction in line with the long axis of the femur [7]. Gavril Ilizarov, a prominent soviet orthopaedic surgeon and researcher is the most widely quoted author and considered the father of distraction osteogenesis. He chanced upon this discovery when a patient he was managing distracted a fracture instead of compressing [8].

A 44-year-old male, FO, was a passenger on a motorbike that got involved in an accident on 28.09.2018. An oncoming motor vehicle lost control and rammed them on a busy inter-city highway. 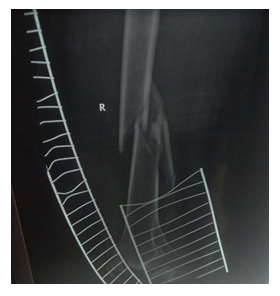 He sustained an isolated comminuted, wedge fracture of his right femoral shaft. He underwent sub-optimal treatment of his injury with a large fragment plate and screws that did not heal adequately after a follow-up period of four months (Figure 1). He developed an infected non-union with a huge sequestrum developing underneath the plate. A decision was made to undertake multi-staged surgery to salvage his limb. The first surgery involved removing the infected implants and sequestrum. This subsequently left a 25 cm gap that was filled with antibiotic-impregnated bone cement (Figure 2). 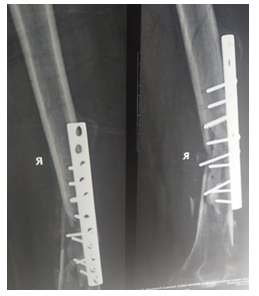 Figure 2: Sub-optimal treatment of fracture with a plate. Later developed into an infected non-union with a large sequestrum underneath the plate. 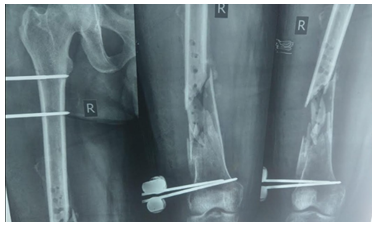 Figure 3: Plate removed and fracture stabilized with an external fixator.

The next stage was carried out after 6 weeks. A complex procedure where an intramedullary nail was placed in such a manner that length was maintained (Figure 3). A uniplanar transport frame was also applied in the same sitting and proximal corticotomy done. Bone transport of the intervening segment of bone commenced after one week of recuperating and education. Transport was done at the rate of 1mm per day over a period of 3 months. Traction was stopped when desired length was achieved. 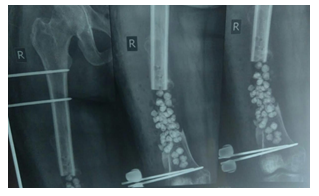 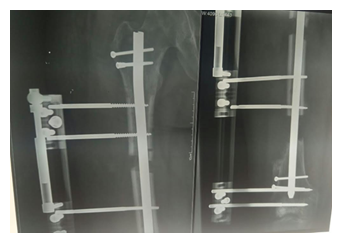 He was then followed up every two weeks for dressing changes and monitoring of pin-sites and soft-tissues. Serial radiographs were also done to monitor progress (Figure 5).

The first stage of normal fracture healing occurs when the blood vessels surrounding bone and soft tissues are disrupted thus forming a hematoma around the fracture site. This hematoma acts as the initial framework where inflammation and callus formation will take place. This stage takes approximately one week.  The next stage is inflammatory – during this stage the inflammatory cascade is activated, cells and cytokines congregate at the fracture site to initiate the healing process. Neutrophils, macrophages and various growth factors have been shown to play a crucial role during this inflammatory phase. The inflammatory mediators, white blood cells and young chondroblasts invade the hematoma site leading to cardinal signs of inflammation over one week.

The third stage, fibro-cartilaginous stage begins when fibroblasts and osteoblastic cells invade the hematoma to begin forming callus. Callus is a soft, demineralized osteon. The osteoblasts undergo active mitotic division at this stage and matures to form osteocytes thus converting the soft callus into hard callus. At this stage, hard callus formation is intentionally disrupted (thus the term distraction osteogenesis) and the soft callus is expanded sequentially until the desired length is achieved. 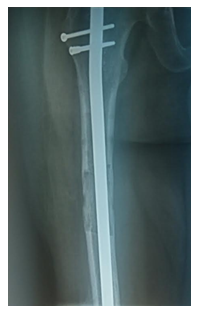 Once the original length is achieved, the normal histogenic regenerative process of bone mass, shape and size is attained through bone remodeling and calcification of the hard callus. Bone remodels according to the amount of mechanical stress it is exposed to (Wolff’s law) [9]. These stages overlap and this entire process begins when the fracture occurs and lasts till one year after the initial injury.

Common complications associated with this method include pin-site infections, restricted joint motion, angular deviations and fractures after removal of the frames. The traction force on bone also creates tension on the surrounding soft tissues. These slow adaptive changes are known as distraction histogenesis. There is paucity of documented soft-tissue complications. The slow, stretch of overlying skin, muscles and nerves appears tolerable to most patients [10].

Osteogenic distraction is also a multi-stage process that closely mirrors fracture healing. The low energy osteotomy that initiates the process. This triggers the fracture hematoma. This is followed by a period of latency – mirrors inflammation. The distraction process – fibro-cartilaginous and callus formation. The final stages – consolidation and remodeling [10].

Distraction osteogenesis was successfully applied in this case. It took a total of 92 days under close supervision to fill a bone defect of 25 cm. The new bone formed was structurally sound enough to allow both kinetic and static functions of the limb. Post-management radiographs showed full osteon formation and related surrounding tissue healed normally.

This research received no specific grant from any funding agency in the public, commercial, or not-for-profit sectors.

The authors report no conflict of interest