This is a case report of an 40 years female patient with Scheuermann Kyphosis with a rigid thoracic hyperkyphosis of 90º and compensatory lumbar hyperlordosis of 92º, treated with a single posterior approach, Ponte osteotomy and instrumented posterolateral fusion. There is some discussion about the best surgical approach. Combined approach was classically considered the gold-standard, but recent studies revealed that posterior-only approach allows comparable corrections with less complications rate. Posterior-only approach good results are related with advances in posterior instrumentation combined with posterior column shortening techniques, such Ponte osteotomies. Preoperative planning is essential. Spine instrumentation should extend from proximal end vertebra to sagittal stable vertebra.

Scheuermann disease, first described by Holger Werfel Scheuerman in 1921, is an idiopathic structural sagittal plan deformity [1]. It´s traditionally defined as thoracic or thoracolumbar hyperkyphosis caused by three consecutive vertebrae with ≥5º of anterior wedging (Sorensen criteria). Other radiographic changes can be found like endplate irregularity, loss of disc space height and sometimes Schmorl´s nodes [2]. The incidence ranges from 1% to 8% with a male-to-female ratio that ranges from 2:1 to 7:1. Generally it presents in adolescence but a subset of patients present in adulthood [3]. Disease aetiology it’s unknown. It´s believed that it is a result of a development error in collagen aggrega-tion with disturbance of endochondral ossification of the vertebral end plates. This results in wedge-shaped vertebra and increased kyphosis [3].

Disease can be classified into typical and atypical forms. The typical form is more common and comprise a thoracic hyperkyphosis with nonstructural lumbar hyperlordosis. Atypical form, also called type II or lumbar Scheuermann disease, is generally seen in active, athletic periadolescent boys that present with thoracolumbar kyphosis. Changes at thoracolumbar junction are typically painful [3]. Pain and disability are more common in adults with this deformity when compared with other adults with same age [3]. Adult Scheuermann kyphosis can be managed conservative or surgically. Nonsurgical measures include anti- inflammatory drugs and physical therapy. This should focus in postural improvement exercises and trunk extensor strengthening. Deformity correction shouldn’t be expected but may improve general physical conditioning and alleviate pain. Bracing it’s also an option, particularly in patients with severe pain who aren’t surgical candidates. However its role is limited and most times poorly tolerated [3]. Surgery it’s indicated when conservative treatment fail. Indications for surgery are: severe deformity (Cobb >75º), deformity progression, severe pain and functional disability, cosmesis and, rarely, cardiopulmonary (Cobb >100º) or neurological compromise [3-5]. There is some discussion regarding the best approach, fixation levels and use of adjunctive osteotomy techniques [3-9]. This case report presents an 40 years old patient with Scheuermann Kyphosis treated with a single posterior approach, Ponte osteotomy and instrumented posterolateral fusion. 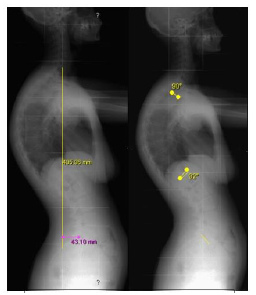 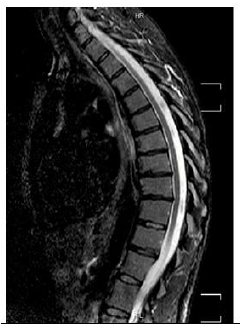 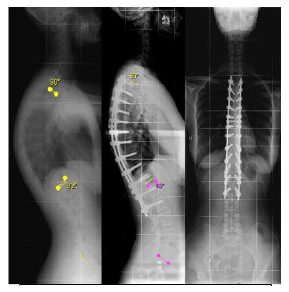 Figure 5: Radiographic study revealing thoracic kyphosis to 50º and compensation of lumbar lordosis to 62º, 3 years after surgery.

Surgical treatment main goals; are pain relief, functional improvement and deformity correction. It allows deformity correction but also prevents its progression [3-5]. MRI was made to check signs of hernia or other intracanalar pathology that could cause cord compression after deformity correction [3]. Neurological surveillance during surgery it’s mandatory. There is some controversy about the best surgical approach. Correction can be accomplished by anterior-only, combined or posterior-only approach. Since Bradford et al publication in 1980 combined approach was considered the gold-standard [3, 5, 7, 8]. Anterior approach involves interbody release and fusion with segmental instrumentation. It has the advantage of allowing anterior longitudinal ligament release and create an interbody fusion under compression rather tension, as occurs in posterior surgery. Combined approach, with anterior apical release and fusion followed by posterior instrumentation and fusion, is usually reserved for bigger (Cobb angle >80º) and stiffer deformity’s (flexibility <50%), or in the presence of anterior bone bridges.

Advances in posterior instrumentation with advent of pedicle screw fixation, combined with posterior column shortening techniques, such as Ponte osteotomies, turned posterior-only approach the preferred approach in most cases of Scheuermann disease. Ponte osteotomy´s described by Alberto Ponte in 1984, consists of wide facectomies, resection of spinous processes, ligamentum flavum and inferior and superior lamina borders [10]. Posterior only-approach allows corrections compared to combined approaches with less complication rates, even in the presence of large and stiff deformities like in the clinical case presented. It`s associated with less blood loss and shorter surgical time, avoiding a thoracotomy and consequent morbidity [3-5, 7, 8, 11] Preoperative planning of the levels to fuse it´s essential to avoid postoperative junctional kyphosis. Most of the spine surgeons agree that that the upper limit of the fusion must be the proximal end vertebra in the measured kyphosis. On the other end, there is some discussion about the distal fusion level. The current consensus for the distal fusion level is to include the distal end vertebra and first lordotic disc beyond the transitional zone distally.

However, determining the end vertebra isn´t easy because the wedging of the vertebral body and the irregular endplate common in Scheuermann disease. The first lordotic disc it’s defined as the most proximal disc in the lumbar spine whose endplates converge posteriorly, but it´s often difficult to measure the convergence of disc space at transitional thoracolumbar junction. Kyu-Jung et al. developed the sagittal stable vertebra (SSV) concept. SSV is defined as the most proximal vertebra touched by the posterior sacral vertical line (PSVL), which is a line drawn vertically from the posterior-superior corner of the sacrum on the lateral upright radiography. So the lowest instrumented vertebra should include the SSV to avoid impaired sagittal balance and to center fusion mass over the sacrum. This authors have proved that fusion shorter than SSV resulted in the distal end of the fusion mass behind the sacrum, with global sagittal imbalance and a tendency to develop distal junctional kyphosis. Deformity correction shouldn’t exceed 50% of initial curve. Superior corrections are associated with increased risk of junctional kyphosis [4, 7, 9]. After radiographic analysis, D3 was defined as the proximal end vertebra and L2 as the SSV (Figure 6), and our patient was proposed to D3-L2 instrumented posterolateral fusion. This approach allowed a good correction without signs of junctional kyphosis. 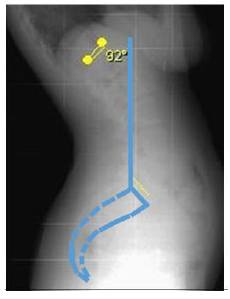 Complications are more frequent in adults. Most common are: loss of correction, junctional kyphosis and infection. Pseudarthrosis its also a fearsome complication in adults, so patients should be optimized previous to surgery [3]. There is evidence that vitamin D deficiency can affect the time and rate of successful arthrodesis [12, 13]. Vitamin D has a central roll in bone metabolism and its deficiency results in low bone mineral density and osteoporosis. Normal values are considered to be >30 ng/ml. Vitamin D levels less than 20 ng/ml are considered as deficiency and levels of 20-30 ng/ml as insufficient levels. Low vitamin D levels are associated with low calcium absorption at intestinal level. This increases parathormone secretion and osteoclast activity which can impair arthrodesis rate or lead to longer times to fusion, with a consequent increase of implant stress and potential loosening. Ravindra et al, recently analysed the relationship between vitamin D deficiency and rates of pseudarthrosis following spine fusion. In their work they find a high rate of vitamin D deficiency (23%) and stablished that vitamin D deficiency was an independent predictor to pseudarthrosis and increased time to fusion [13-18].

In our case we had measured serum Vitamin D levels and found an important deficiency. Patient started vitamin D supplementation, so it was possible to correct a modifiable variable that can affect negatively surgical results and clinical outcome. This clinical case prove that a significant pain relief, good functional outcomes and satisfactory radiological results are possible with a single posterior approach even in larger and stiffer curves. Surgical treatment should be carefully planned. The main goal it’s to achieve correction with a spino-pelvic balance in order to avoid junctional Kyphosis, loosening of the implants, pseudoarthoris and poor clinical outcomes. We recommend extend instrument-tation from proximal end vertebra to SSV. Orthopaedic surgeons and particularly spine surgeons should be aware of the importance of vitamin D deficiency as risk factor for surgical success. We recommend preoperative measure of serum vitamin D to all patients that are elected to surgical treatment and vitamin supple-mentation in the cases of deficiency.