Accepting A Kidney with Polycystic Kidney Disease from A Cadaver Donor: A Case Report

Citation: Maher Mohammed Aldemerdash. Accepting a Kidney with Polycystic Kidney Disease from a Cadaver Donor: A Case Report. Archives of Nephrology and Urology 4 (2021): 124-127.

Faced with the long waiting list for a kidney transplant, the use of donors with expanded criteria, like polycystic kidneys, is an option that aims to increase in a short time the supply of kidneys for transplant. Here we present of a patient with end stage renal failure and limited vascular access who received a deceased donor kidney from a 33-year-old who develop intracranial hemorrhage who likely had undiagnosed Polycystic Kidney Disease. The transplant went uneventful and showed promising results, and the recipient ended up with a good renal function. The option of using donors with polycystic kidneys is safe and gives good results.

Patients under the age of 40 years rarely develop end-stage renal disease (ESRD); however, approaching the age of 60 years, end-stage renal disease requiring dialysis increases in frequency. The treatment of choice in patients who have progressed to ESRD is dialysis or transplantation [1]. Kidney transplant as the treatment for ESRD helps return renal function to an adequate level and offers patients an opportunity to resume their professional and social life. It is a well-established fact that patients receiving a kidney from a deceased donor have an improved quality of life and a better chance at long-term survival than patients who are on a transplantation waiting list. The supply of the organs, however, does not fulfill their demand.

Polycystic kidney disease (PKD) is one of the major primary renal diseases that necessitate renal transplant. It is a genetic tubulointerstitial disease that causes progressive loss of renal function and the development of multiple cysts in renal parenchyma [2]. The literature is scattered with case reports of patients who have received kidneys from a deceased ADPKD donor showing encouraging outcomes [3-7].

Here we provide our experience of a patient with end stage renal failure who received a deceased donor kidney from a 33-year-old who develop intracranial hemorrhage and brain edema who likely had an undiagnosed ADPKD.

A 33-year male with no known comorbidities presented to the hospital with loss of consciousness with GCS of 8/15, with no history of trauma. Emergency computed tomography (CT) scan showed intracranial hemorrhage with severe brain edema. He was admitted to the intensive care unit (ICU). His creatinine on admission was 103 mmol/L with no previous labs to compare it with. He had an episode of hypotension 83/51 mmHg that was supported with inotropes. He developed AKI afterward with a peak of creatinine 255 mmol/L and creatinine of 93 mmol/L at the time of Kidney retrieval. Urine analysis was negative for proteinuria, hematuria, leukocytes, or casts. Urine output was around 2L/24 hours. His IgG was positive for CMV and EBV. He was negative for HBV, HCV, HIV, HTLV, and Syphilis. His abdominal imaging (ultrasound and CT) showed multiple Liver cysts, two simple Renal cysts in the right and one on the left. Those findings and with the history could suggest that he could have had an undiagnosed ADPKD.

During his hospital stay, his GCS was deteriorating, and he was declared brain dead. After discussing his case with the Transplant committee, we accepted and retrieved his left Kidney.

A 22-year-old female with end stage renal disease (ESRD) secondary to unknown primary. She has been of intermittent hemodialysis (IHD) with limited vascular access for five years. past history was not significant, and there was no family history of Renal disease. The donor: recipient Human Leucocyte Antigen (HLA) mismatch was 2:2:2 at HLA's A:B:DR. All her preoperative serologies were negative except for IgG CMV and EBV. She was counseled about the risk and benefits of this Kidney, especially with her limited vascular access. Her surgery was uneventful. The graft had one artery, one vein, and one ureter. The cold ischemic time was 8 hours and 8 minutes. The warm ischemic time was 52 minutes, and the anastomosis time was 32 minutes. She received Thymoglobulin and Methylprednisolone as induction agents, followed by our usual maintenance protocol Cellcept (1g PO BID), Tacrolimus (aiming for a Tacrolimus level 8-10), and prednisone taper (30 mg po daily).

She developed delayed graft function post-operatively and required dialysis once for Hyperkalemia. Her creatinine started improving, as shown in the figure 1. 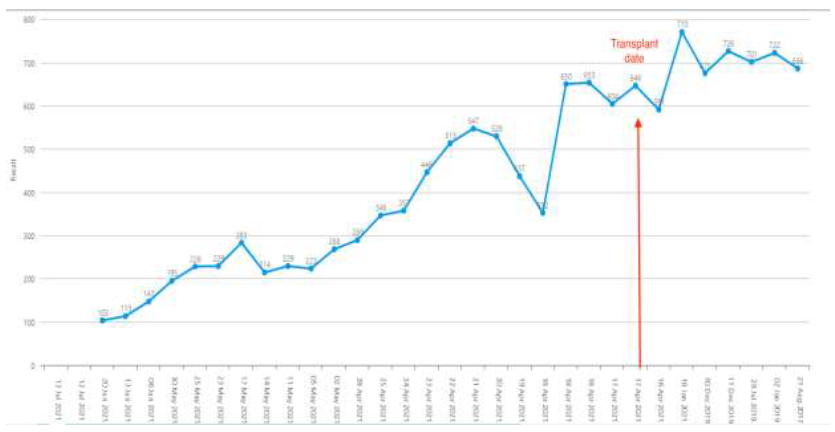 Autosomal dominant polycystic kidney disease (ADPKD) is a hereditary disease that causes cysts formation in the kidneys and gradual impairment of renal function. Accounting for 2-9 percentage of the population, it frequently ends in renal failure. ADPKD symptoms develop in adulthood with 85% of the carriers developing symptoms in the fourth decade of life [8]. Etiological causes of ESRD include ADPKD in 10-15 percent of the cases. However, the development of renal failure following the beginning of ADPKD symptoms generally takes 10 years. The probability of progression to renal failure in 50-year-old patients is 23%, but it increases to 48% in 70-year-old patients [9, 10]. In the case of the unavailability of donor kidneys, the transplantation of an ADPKD kidney is considered viable if the parenchyma and renal function are intact. Currently, the 16 cases reported in the literature have had excellent transplant outcomes, with immediate function in 81% of the cases. Good renal function has been observed in 8 cases with follow-up exceeding 3 years. A case of excellent renal function with a 15-year follow-up has also been reported [11].

Concerns about transplanting an ADPKD kidney mainly center around the risk of cyst growth that can progress to renal failure. However, Howards et al. [4] reported that the development of ESRD following transplantation of an ADPKD kidney with cyst size up to 34 mm can take 12.5 years. Donor age is a key factor determining the time the transplanted organ can survive. A kidney transplant from a 21-year-old deceased donor should allow a minimum of 10 years of kidney function. Infection, cyst rupture, and bleeding are other rare but potential risks, especially when a biopsy is required for renal transplant. With the administration of Calcineurin-based immunosuppressants, graft survival has improved considerably in the last four decades. Comparing mortality between patients on dialysis who were on the transplant waiting list and patients receiving transplants from deceased donors, transplant patients were found to have lower mortality after a 2-year follow-up. Bearing in mind the wide gap between the demand and supply of kidney donors, and the quality of life with a functional kidney, a patient may receive a deceased donor ADPKD kidney with an adequate renal function depending upon the graft survival period with immunosuppression and the approximate time it would take for the deceased donor kidney to fail [12].

This fact confirm the option of using donors with PKD is safe and give good results especially if the potential recipient has limited vascular access for dialysis.