The first description of this benign condition was made in 1896 by Albrecht, who reported the first human case of splenosis on the peritoneum [1]. Cases of post-traumatic splenic autotransplantion following trauma or splenectomy were then reported at the beginning of the 20th century [2, 3]. The terminology “splenosis” was first used by Buchbinder and Lipkopf in 1939 [4]. In the nineties of the last century the incidence of splenosis was estimated to be 58 to 65% [5, 6]. In contrast, nowadays splenosis is a relatively rare condition. Ectopic autotransplantation has been an attempt to preserve spleen function after spleen trauma or elective splenectomy. Typically splenosis is found in the intraperitoneal cavity of the abdomen and pelvis and can even mimic tumor mass or endometriosis [7, 8].

A 58-year-old perimenopausal nurse has been referred to our outpatient clinic. The patient complaints of vaginal pressure and intermittent feeling of urine leakage, nocturia, mild symptoms of stress incontinence and dyspareunia for some years due to vaginal dryness. The patient was a G2/P1 with a past history of splenectomy and partial pancreatic resection after an abdominal trauma in the childhood. The further medical history included tonsillectomy and appendectomy, chronic hypertension as well as idiopathic microhematuria. She did not take regular medication and had no complaints of weight loss, night sweats or fever. Further, smoking and regular alcohol consumption was negated and there was no family history of cancer. On physical examination, the patient was noted to have a perineal scar after episiotomy. The speculum examination revealed a significant prolapse of the anterior wall, a minor descent of the posterior wall as well as a moderate descent of the uterus. The POP-Q Score was: Aa and Ba +3; C -3, D -7, gh 5, pb 4, tvl 10, Ap and Bp -2.5, congruent with the diagnosis of prolapse of the anterior wall grade 3 and prolapse of the uterus grade 1. The pelvic floor showed a moderate contractability with grade 2 on the Oxford scale (0-5). Introital, transvaginal and postvoid sonography revealed no significant findings. Urine test showed microhematuria, as known before. Urodynamic studies were omitted as symptoms of stress incontinence were assessed to be subjectively irrelevant and incontinence could not be provoked by reposition

After failed conservative pelvic floor therapy and refused pessary treatment, a “lateral laparoscopic suspension (LLS) – Dubuisson” procedure was scheduled. The presurgical work up showed a normal complete blood count as well as normal coagulation parameters (INR, PTZ, aPTT and thrombocytes). Laparoscopically, the abdomen showed multiple adhesions. After adhesiolysis, a generalized abdominal exploration revealed multiple vascularized nodules in the upper abdomen, on the right pelvis wall (Figure 1A), in the Douglas cavity, on the broad ligament /parametrium/Lig. Ovarium proprium (Figure 1C, D) as well as on the small intestine (Figure 1B). As these nodules were of unclear origin and dignity, biopsies were taken and sent for frozen section analysis and a general surgeon was consulted for further procedure planning. As the pathologist diagnosed benign lymphatic tissue, compatible with spleen tissue, the team decided to continue the operative procedure as planned. On recommendation of the surgeon postoperative work up included an analysis of tumormarkers including CEA, CA 125 and CA 19.9, which turned out to be normal. Equally, a coloscopy was conducted due to the patients age and to exclude potential intestine pathology, without significant findings. An MRI (1.5T, Siemens AERA) scan was performed to demonstrate local extent of ectopic spleen tissue for documentation. A four-centimeter dimension spherical formation was detected in the splenic bed interpreted as a regenerated accessory spleen (Figure 2B-C, Coronar T2 HASTE Sequence). Several smaller, up to two-centimeter, round, well defined formations were described in particular in the lower abdomen surrounded by small intestine. All lesions showed signal equivalent to lymphatic/spleen tissue in all pre and post contrast sequences (Figure 2A, D, Coronar T2 HASTE Sequence).

Conventional histologic analysis of the biopsies confirmed the diagnosis of spleen-like tissue. Briefly, T-cells as well as B-cells were located around CD-34 positive vessels in a typical manner, indicating accumulation of white-pulp tissue of the spleen. Furthermore, located around those lobules, erythrocyte- as well as granulocyte- rich and high capillarized areas were found, indicating read pulp tissue of the spleen (Figure 3A-D). We did not perform quantitative assessment of IgM antibodies or phase- interference microscopy of erythrocytes, yet these diagnostic measures would be needed to demonstrate functional spleen tissue. The patient was discharged after an uneventful postoperative period in good general condition. After 4 weeks the patient reported no vaginal bulging or pressure. The POP Q was Aa and Ba -2.5, C -7, D-8, Ap and Bp were –2.5, gh 4, pb 4 and tvl 9, describing normal vaginal anatomy. 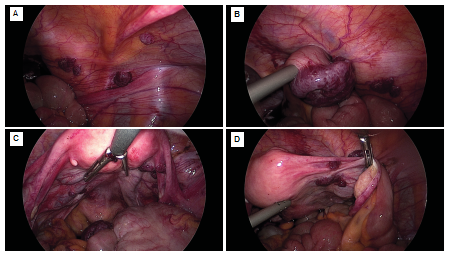 Figure 1: A) Right abdominal wall, splenotic nodules on peritoneum; B) Large nodule on small intestine; C) Douglas cavity with small nodules on broad ligament (?); D) One small nodule between round ligament of the ovary and fallopian tube, larger nodule parametric. 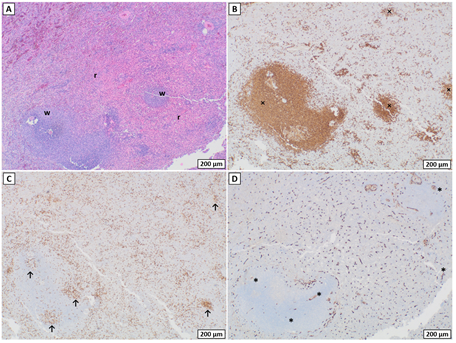 Figure 3: A) Hematoxylin staining of the spleen like tissue within the biopsies of the abdominal wall; B) Typical areas of white (w) and red pulp (r) are marked; C-D) The white pulp comprises the lymphoid compartment of the spleen and consists of CD-79 positive B-cell- (×) and CD-3 positive T-cell- rich areas (↑). The latter also known as periarteriolar lymphoid sheaths (↑) and are located around CD-34 positive vessels (*).

This case report illustrates abdominal splenosis as a differential diagnosis for abdominal masses in patients after splenectomy. Our patient, as most patients with splenosis [7], was asymptomatic. She negated dyschezia, dyspareunia or any other chronic pain or abdominal discomfort. However, there are reports where splenotic nodules caused chronic pain due to location on the ovary or in the douglas cavity and rarely even caused bowel obstruction and therefore had to be removed [9-11]. Yet in some cases, patients may also show symptoms like dyspareunia, dyschezia or other specific or unspecific abdominal pain [9,  12]. It is still unclear whether ectopic spleen tissue can mimic full spleen function. However, it  has been reported that patients who underwent autotransplantation of splenic tissue had normalization in spleen function shown by post-splenectomy platelet count, immunoglobulin M levels and peripheral blood smears [13-15]. Therefore resection of asymptomatic ectopic spleen tissue in patients with a history of spleen injury, if found accidentally, is not indicated, as the tissue might be immunologically relevant. [7, 16]. This does account for patients with history of spleen trauma, but not for those who underwent splenectomy due to malfunction of the organ. In the latter, ectopic spleen tissue might cause recurrent symptoms [17].

Splenosis can be easily mistaken for malignant tumor mass, as it is sometimes not clearly distinguishable in contrast enhanced CT scan [12, 18, 19]. This may lead to unnecessary invasive diagnostic or even therapeutic measures [20, 21]. It has also been reported that splenotic nodules were mistaken for endometriosis [8, 22]. If an abdominal mass of unknown origin is found in patients with history of traumatic spleen injury in medical imaging, splenosis has to be considered as a differential diagnosis. It is highly recommended to conduct a scintigraphy using heat damaged Tc-99m-labelled autologous erythrocytes to avoid invasive diagnostics or even treatment such as chemotherapy [7, 12, 14, 15, 19, 21]. Even though our patient reported splenectomy due to abdominal trauma in the childhood, medical team was surprised by the ectopic spleen tissue. Intraoperatively, gynecologists and surgeons did not remember a similar case, nor did other experienced colleagues associate the documented pictures with splenosis. In a postsurgical round the patient remembered that an accessory spleen has been described in a previous routine renal sonography. However, splenotic nodules have not been described so far in this patient. Accessory spleens are congenital, usually hypoplastic until the principal organ is removed and are found in the spleen bed. If present, they are most of the time singular and are anatomically similar to a regular spleen. They are vascularized by a branch of the splenic artery. Splenosis presents with multiple nodules that are unevenly spread in the abdomen, smaller in size (up to three centimeters) and supplied by small omental or peritoneal vessels [7, 14].

As we already had histologic confirmation of spleen like tissue, we decided to perform a classic MRI to document the distribution for future clinical decision-making regarding this patient. Proper spleen function enables degradation of old or dysfunctioning erythrocytes and thrombocytes as well as activating B- and T- lymphocytes as a secondary immune response. The latter is especially important to protect from severe infections caused by encapsuled bacteria, as Streptococcus pneumoniae, Haemophilus influenzae an N. meningitides [14]. Splenectomized patients with ectopic spleen tissue have shown regular blood filtration and immunoglobulins within normal ranges [15].As this condition is still rarely investigated due to low case rates, patients are informed about a higher risk for severe infections and are advised to get vaccinated against pathogens as mentioned above, as well as seasonal Influenza.  Severe infection is the most common cause for morbidity and mortality post splenectomy. Today conservative management of children with spleen injury is first line treatment. Only if hemodynamically unstable and nonresponsive to intravenous fluids and blood, operative proceeding is recommended. Even then spleen sparing therapy is preferred over total resection of the organ [23-25]. If not possible, autologous heterotopic reimplantation of spleen tissue into omentum majus pockets can be taken into consideration [14, 26, 27]. As the benefit of autotransplantation is unclear, this technique plays a minor role in modern surgery.

This patient did not receive any vaccines against N. meningitides, H. influenzae type B or S. pneumoniae, because they were not available in her childhood. As she has no history of pneumonia or meningitis or other severe infections caused by encapsulated organisms, we assume some functionality of the residual splenic tissue. Concordantly, histological analysis showed some proliferating lymphocytes (KI 67 positive CD3 or CD79 cells). However, further investigations such as quantitative assessment of Ig antibodies or phase- interference microscopy of erythrocytes, would be needed to confirm the actual functionality. The patient emphasized the psychological stress she suffered from as a child due to her mothers’ fear of infections and therefore missing many peer related activities. Parents of splenectomized children are despite broad vaccine availability still advised to be extra attentive of any signs of infection and children are treated more often with antibiotics [14]. Accordingly, we believe that further investigation concerning diagnostical methods of spleen function is recommended. We want to emphasize the importance of anamnesis as an indispensable diagnostic tool in times of broad technical possibilities. Splenosis, if found, should be well documented in patients’ medical record to avoid further redundant measures.

We want to emphasize the importance of considering splenosis in patients with history of traumatic spleen injury. If found, this condition should be well documented in patients’ history as it could mimic malignant tumor mass or endometriosis in standard medical imaging and lead to further redundant invasive measures. Splenotic nodules, if asymptomatic, should not be resected, as they might be immunologically relevant. However, this does not account for patients who were splenectomized for dysfunctional spleen. For definitive diagnosis non-invasive diagnostic scintigraphy using heat damaged Tc-99m-labelled autologous erythrocytes is recommended.

The authors report no conflict of interest.