1Department of Pathology and Cytology, Faculty of Medicine-School of Health Sciences, University of Thessaly, University Hospital of Larissa, Larissa, Greece

A 44-year-old woman was referred to urologist for urinary retention due to a urethral mass. Magnetic resonance imaging (MRI) showed a round mass that surrounded the urethra completely. The regional lymph nodes were normal and no other lesions were identified. Biopsy was performed revealing a tumor that was composed of large polygonal cells with eosinophilic and periodic acid-Schiff (PAS) - positive granular cytoplasm, indistinct cell margins and small round central nuclei. Immunohistochemical staining for S100 protein, vimentin, calretinin and inhibin Α was positive, indicating a granular cell tumor. Excision of the tumor including the urethra and an umbilical catheterized stoma using Mitrofanoff principle was performed.

Granular cell tumors have been reported to develop in soft tissues such as skin and subcutaneous tissue, bronchus, oesophagus, breast, tongue, larynx, pharynx, gingiva, trachea, right colon, vulva, and hypopharynx [1]. The incidence in the urinary tract is extremely rare with only few cases having been reported. Herein, we present a case of a granular cell tumor of a female urethra that in our knowledge is the first case of that size reported in the literature.

A 44-year-old woman was referred to the urologist by a gynecologist for urinary retention and a urethral solid mass that was found during a clinical examination. A Foley catheter was introduced and Magnetic Resonance Imaging (MRI) was performed. A round mass of 7.4 cm × 6.6 cm × 5.5 cm that completely surrounded the urethra was shown (Figure 1). Pelvic and inguinal lymph nodes were normal, and no other lesions were identified. Urinalysis was normal and urine cytology was negative. Biopsy of the tumor was performed. Histologically, the tumor was composed of large polygonal cells with abundant eosinophilic granular cytoplasms with coarse granules (representing phagolysosome aggregates). The nuclei showed mild to moderate nuclear atypia and small round central nuclei. Immunohistochemical staining for S?100 protein, neuron?specific enolase (NSE), smooth muscle actin (SMA), and cluster of differentiation 68 (CD68) was positive, indicating that it was compatible with granular cell tumor GCTs (Figure 2a, 2b). The staining was negative for cytokeratines ΑΕ1/ΑΕ3, caldesmon, GFAP, CD31, HMB45, MelanA, EMA, and SMA. Excision of the tumor, including the urethra, was performed after an informed consent of the patient (Figure 3).

The bladder neck was closed and urinary diversion was performed.  Due to previous appendicectomy, an ileal segment of 15 cm using the Mitrofanoff principle was used as a neo-urethra. The ileal segment was remodeled around a Foley catheter of 14 Fr and implanted in the posterior wall of the native bladder. The length of the submucosal tunnel was 3-4 cm. The other side of the limb was brought out through the umbilicus. In addition, Martius flap was created in order to help bladder neck healing and vaginal reconstruction. Postoperative period was uneventful and clean intermittent catheterization (CIC) was initiated. 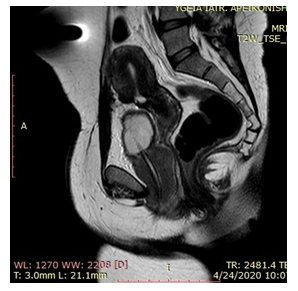 Figure 1: MRI indicating the mass around the urethra. 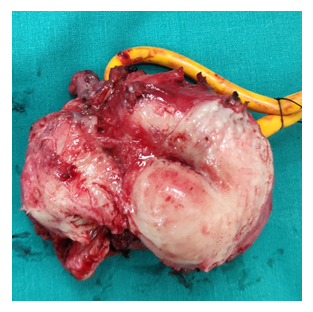 Figure 3: The mass with a Foley indicating the urethra

Granular cell tumors (GCTs) are rare soft tissue neoplasms with neuroectodermal differentiation. They most often occur in the skin or subcutaneous tissue, of middle-aged adults with a slight female predominance. Virtually any anatomic site may be affected, but the head, neck regions and tongue are the most common [2]. GCTs of the female genitalia are extremely rare with less than 20 cases reported in the English literature [1]. Regarding the urethra, to the best of our knowledge, this is the third case reported and the second involving a female urethra [3, 4]. Granular cell tumours are also known as Abrikossoff tumors, first described by Abrikossof in 1926 [5]. In the beginning, such tumors were considered to originate from myogenic cells, and were called granular myoblastomas. Recent immunohistochemical studies revealed the most probable origin of these tumours to be Schwann cell derived [6]. However, Gurzu et al. proposed that the GCTs cannot be considered a purely neural tumor. An immunohistochemical profile study of 2250 soft tissue tumors suggested that the GCTs seemed to have an endomesenchymal origin [7]. Almost all granular cell tumors can be treated by simple excision.  However, recurrences have been reported, which are considered to result from incomplete excision [8]. In rare cases, granular cell tumors may have a malignant course; they behave similarly to malignant peripheral nerve sheath tumours and have a 50% rate of metastasis. However, they constitute for less than 2% of all granular cell tumors [9]. Franbrug-Smith reported the largest series of malignant cases. They suggested that tumors with necrosis, spindling, vesicular nuclei with prominent nucleoli, increased mitotic activity (MIB-1 expression of more than 10%), high nucleocytoplasmic ratio and pleomorphism could be considered malignant. They also reported that the median tumor size in malignant cases was 4 cm (range, 1-12 cm) whereas in benign cases it was 2 cm [10]. Although in our case the tumor was considered to be benign microscopically, the size of it was relatively large which suggests that stricter follow-up should be required. Regarding the surgical technique, similarly to the literature reported it was impossible to separate the urethra from the tumor and urethrectomy was performed alongside with the Mitrofanoff procedure using an ileal segment due to an appendectomy.