Background: Labour pain described as ‘the most horrible’ affects both physiological and psychological aspects of labour. Thus, the provision of labour analgesia is of paramount importance to better both maternal and neonatal outcomes. In our country, majority of obstetric services are in the hands of trained nurses and non-specialized doctors and thus awareness and acceptance of pain-relieving for women in labour virtually does not exist. Therefore, drugs like paracetamol and tramadol with advantage of easy availability, being inexpensive with no special technique of administration are a boon for labour analgesia.

Objective: To compare the role of intravenous paracetamol versus intravenous tramadol as an intrapartum labour

Materials and methods: A total of 273 primigravidae with term gestation with singleton pregnancy with vertex presentation in active phase of labour with cervical dilatation ≥ 4cm with spontaneous onset of labour were taken who satisfied the inclusion and exclusion criteria of the study. Group P (141 women) and Group T (132 women) received 100 ml intravenous infusion containing 1 gram of paracetamol single dose and 100 mg of tramadol hydrochloride diluted in 100 ml normal saline over 15 minutes respectively. Visual Analogue scale (VAS) was used to assess pain intensity, before administering drug, after 1 and 3 hours of drug administration. The primary outcomes measured were difference in VAS score in both groups. The secondary outcomes analysed were mode of delivery, duration of labour, drug-delivery interval, maternal side effects and neonatal outcomes in terms of birth weight, APGAR scores and NICU admissions.

Labour is the series of events that take place in the genital organs in an effort to expel the viable products of conception (fetus, placenta, and membranes) out of the womb through the vagina into the outside world. It is characterized by regular painful uterine contractions which increase in frequency and intensity. Labour pain has been described as the most agonizing, more than what human nature would be able to bear under any circumstance and ranked high on the pain rating scale when compared to other painful life experiences [1]. The experience of labour is subjective and complex. It is a highly individual response to variable stimuli that are uniquely received and interpreted. These stimuli are modified by emotional, motivational, cognitive, social, and cultural circumstances.

From time immemorial there has been this false belief that ‘pain is the mother’s safety and its absence her destruction; that it was the will of god and in someway beneficial to the sufferer and labour progress was related to degree of pain. From those days to the use of ether and chloroform to pregnant women to the present-day practice of evidence based comprehensive program of labour pain management; the field of obstetric analgesia and anaesthesia have trod a long journey. Currently myriad of options are available for pain relief such as acupuncture, transcutaneous electrical nerve stimulation (TENS), hypnosis, psychoprophylaxis, usage of massaging, heating pads and water immersion, inhalational agents like Entonox, parenteral opioids like pethidine, fentanyl, remifentanil and morphine. Modern neuraxial labour analgesia reflects a shift from just pain relief to an overall quality of analgesia, is now the gold standard and frequently being practiced in the developed countries [2].

In our country majority of obstetric services are in the hands of trained nurses and non-specialized doctors and thus awareness and acceptance of pain-relieving for women in labour virtually does not exist. Antenatal education regarding labour, labour pain, birth experience expectations, analgesia options and concerns goes a long way in building a healthy patient- doctor relationship and these women being aware of such facilities and opting for the same. Also, most modern obstetric analgesic practices require costly equipment, continuous monitoring facilities, and expert anaesthesiologists which is scarcely available if at all in a developing country like India. Therefore, drugs like paracetamol and tramadol with advantage

of easy availability, being inexpensive with no special technique of administration are a boon for labour analgesia.

To compare the role of intravenous paracetamol vs intravenous tramadol as an intrapartum labour analgesic.

Secondary objective – To analyze the mode of delivery, duration of labour, drug-delivery interval, maternal side effects and neonatal outcomes in terms of birth weight, APGAR scores and NICU admissions

Selection of cases – 273 primigravidae were taken who satisfied the inclusion and exclusion criteria of the study. 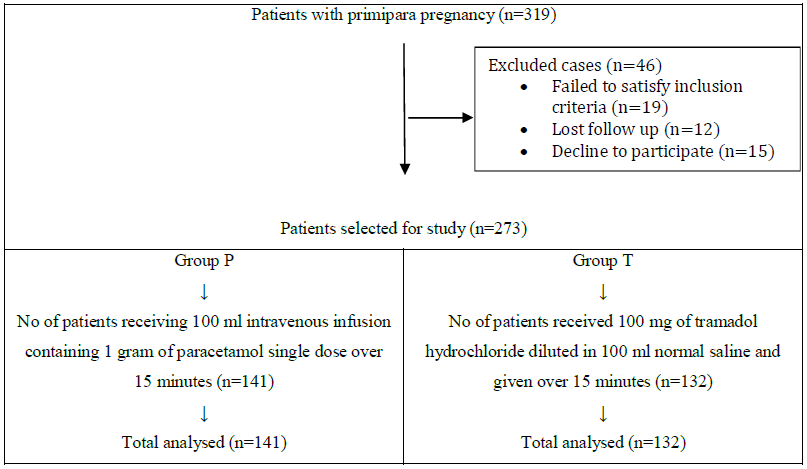 After getting informed written consent from the patients enrolled in our study, they were subjected for thorough examination for fulfilment of all the inclusion criteria. The randomization was done by coin-tossing method into two groups as Paracetamol group (Group P): 141 women received 100 ml intravenous infusion containing 1 gram of paracetamol single dose over 15 minutes and Tramadol group (Group T): 132 women received 100 mg of tramadol hydrochloride diluted in 100 ml normal saline and given over 15 minutes.

Visual Analogue scale (VAS) was used to assess pain intensity. VAS score was further divided as 0: no pain, 0.1 - 3.9: mild pain, 4 - 6.9 : moderate pain and 7 – 10 : severe pain. The pain intensity before administering drug was recorded. The follow up was done with the subjective measurement of pain relief after 1 and 3 hours of drug administration. Labour was monitored using a WHO modified partogram. The primary outcome measured were the difference in VAS score in both groups before administration of drug, 1 hour and 3 hours after administration of respective drugs. The secondary outcomes analysed were mode of delivery, duration of labour, drug-delivery interval, maternal side effects (mothers were monitored for 24 hours after delivery for any side-effects) and neonatal outcomes in terms of birth weight, APGAR scores and NICU admissions.

A total of 273 cases were enrolled in the study who were divided into two groups as group P & group T and considered for statistical analysis. The descriptive statistics were reported as mean (SD) for continuous variables, frequencies (percentage) for categorical variables. Data were statistically evaluated with IBM SPSS Statistics for Windows, Version 20.0, IBM Corp, Chicago, IL.

After 1 hour of drug administration

After 3 hours of drug administration 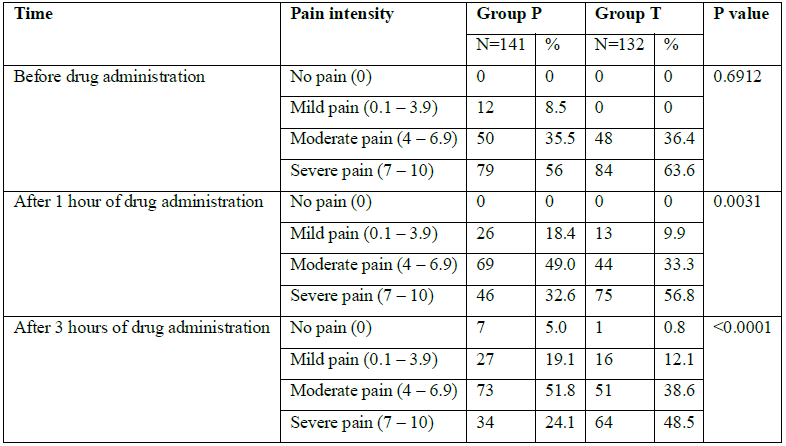 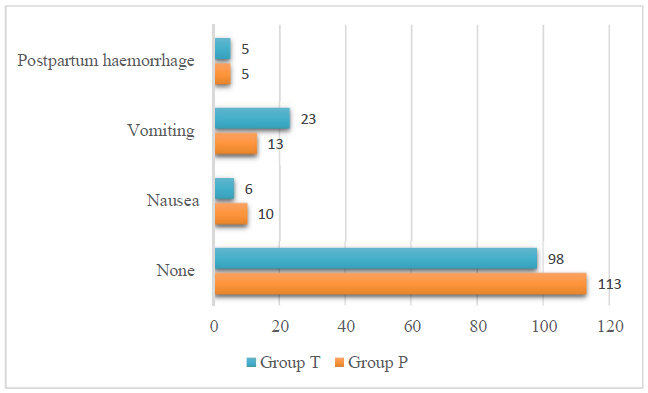 Paracetamol (acetaminophen) is now the most commonly used drug worldwide, available over the counter, used in almost all age groups as first line treatment for pain and pyrexia and forms step one of WHO analgesic ladder [3]. The exact mechanism of action is not fully elucidated. A number of central mechanisms including effects on prostaglandin production, and on serotonergic, opioid, nitric oxide, and cannabinoid pathways and a combination of interrelated pathways are involved [3]. It is centrally acting inhibitor of COX and/ or serotonergic system thus inhibiting prostaglandin synthesis. Various studies have shown the effectiveness and safety of intravenous paracetamol as an analgesic agent in varied spectrum of clinical conditions such as musculoskeletal pain, tension type headaches, migraines and across variety of surgical procedures [4-6]. It is inexpensive, easy to administer, requires no special monitoring, have useful opioid-sparing effects with minimal side-effects.

Tramadol hydrochloride (synthetic analogue of codeine) has a unique pharmacological profile. It combines the mechanism of action of opioids and tricyclic antidepressants. It is a weak µ-opioid receptor agonist and inhibits transmission of pain impulses and alters pain perception. Also, it reduces the reuptake of norepinephrine and serotonin in the descending spinal inhibitory system and thereby enhancing the effectiveness of the inhibitory pathway. It causes less maternal and foetal respiratory and cardiovascular depression common to other opioids [7,8]. It is shown to be effective, well tolerated and forms Step 2 in WHO ladder in treating several painful conditions where treatment with strong opioids is not required [9]. Its use as an obstetric analgesic has been widely studied in both intramuscular (7) and intravenous preparations [8,10]. Along with the ease of its administration it is considered as a good alternative to epidural analgesia in rural Indian setup with less resources [10].

Total duration of labour in paracetamol group was found to be significantly shorter than in tramadol group which further can have multiple potential benefits. This was consistent with various studies done previously [12-15]. Neonatal and maternal outcome was found to be more favourable with paracetamol. Seven NICU admissions were seen in tramadol group. The mean Apgar scores at 1 and 5 minutes were found to be comparable between both groups implying that both paracetamol and tramadol are safe with respect to no neonatal adverse effects. This is in contrast to a previous study by Kaur Makkar J et al. [14] which showed adverse neonatal effects with the use of these drugs but paracetamol being more

safe. Fetal bradycardia was seen in 5 patients in tramadol group (17.2%) as compared to 2 patients in paracetamol group (6.6%). Participants in the tramadol group had more incidence of maternal side-effects which is consistent with other studies [12-15]. Thus, hands down the battle of being the better labour analgesic was won by intravenous Paracetamol.

In the rural Indian setup with low health-care resources, intravenous paracetamol with better analgesic efficacy, shorter duration of labour and fewer maternal side-effects is a better labour analgesic than tramadol.