Citation: Ramsha Saleem and Pillai Anjana. A Case of an Immunocompetent Patient with Disseminated Histoplasmosis Presenting with an Oral Lesion. Archives of Microbiology & Immunology 3 (2019): 068-073.

Objective: Presentation of a case of disseminated histoplasmosis in an immunocompetent individual from a non endemic region, in which a mucocutaneous lesion was the presenting sign of infection.

Case: A 38 year old male from Bangladesh who presented with dysphagia and odynophagia for one month. On physical examination, he was noted to have an ulcerative lesion of the left tongue and epiglottis. Biopsy revealed Histoplasma organisms. The patient was successfully treated with amphotericin for ten days as an inpatient and itraconazole as an outpatient.

Conclusion: This case highlights that a diagnosis of infection with fungal organisms, such as Histoplasmosis, must be kept in the differential of mucocutaneous lesions.

Histoplasmosis, caused by the dimorphic fungus Histoplasma capsulatum, is the most common endemic mycoses in the United States of America. It is found in temperate regions, including the Ohio and Mississippi Valleys in the United States, certain parts of Central and South America, Africa, as well as Southeast Asia. It exists as a mold in the soil, particularly that rich in roosts of pigeons and bats, from which it is inhaled, classically, with activities such as spelunking and bird handling [1].

In most cases, the infection is asymptomatic. However, the organisms can cause clinically significant disease in patients with impaired cellular immunity, such as those with AIDS or those receiving tumor necrosis factor-alpha inhibitors. This is in part because T cells are required to activate macrophages to defend against and destroy the yeast form in the body [2]. However, symptomatic histoplasmosis has also been described in immunocompetent individuals, particularly those at the extremes of age, with underlying pulmonary disease or those who inhale an unusually large inoculum [3]. If symptomatic, it most commonly presents as a self-limiting pulmonary disease as the lungs are the portal of entry for the organisms. However, if there is a failure or delay to activate the macrophage fungicidal ability to confine and kill the organisms in the lungs, disseminated progressive disease can occur.

Extrapulmonary manifestations of histoplasmosis are secondary to lymphatic and hemotogenous spread of the organism [2]. They include gastrointestinal disease such as oral, esophageal or colonic ulcerations that may present as dysphagia, gastrointestinal bleeding or mimic malignancy. A less common extrapulmonary manifestation is cutaneous involvement, in which lesions may present from papules to abscesses to necrotizing vasculitis. Adrenal involvement is also very common, although adrenal insufficiency is unlikely to result [4]. Other organ systems that may be affected include the central nervous system as meningitis/ encephalitis and the cardiovascular system as endocarditis/ pericarditis [1]. In general, a high index of suspicion is required to diagnose disseminated histoplasmosis in immunocompetent individuals.

This is a 38 year old male from Bangladesh with a medical history of type 2 diabetes mellitus and active tobacco use who presented to the emergency department with complaints of dysphagia to both solids and liquids as well as odynophagia for one month. The patient was seen by ENT in the emergency department and noted to have a 2-cm ulcerated lesion on the posterior left tongue and epiglottis. He was presumed to have a diagnosis of oral cancer and scheduled for outpatient biopsy and imaging studies for metastatic disease workup. The patient also quit smoking at this time given his presumptive diagnosis. The patient had the biopsy done five days later, which did not reveal malignancy, but instead showed chronic granulomatous inflammation and Histoplasma capsulate organisms. A few days later, the patient was followed up with ENT and infectious disease outpatient clinics, and was noted to have worsening of his oral lesions as well as worsening of his dysphagia. He was referred for inpatient admission for initiating treatment with liposomal amphotericin.

The patient’s chest CT showed extensive ground glass opacities bilaterally (Figure 1). He underwent BAL and bronchial biopsy, which was positive for non-casseating granuloma but negative for fungal organisms. HIV ELIZA test was negative. His blood and fungal cultures were negative. His serum histoplasmosis Ab was elevated at 1:32 and urine Histoplasma Ag was positive. His abdomen/ pelvis CT revealed bilateral adrenal masses (Figure 2). The patient was hypotensive throughout his stay, and a cosyntropin stimulation test was performed, which was consistent with adrenal insufficiency. The patient was treated with hydrocortisone.

After ten days of amphotericin, the patient’s oral lesions regressed and his dysphagia resolved. He then was loaded with oral itraconazole, and discharged on a maintenance dose. The patient had a repeat CT chest two months after his initial imaging (six weeks into treatment) with improvement of bilateral opacities (Figure 3). 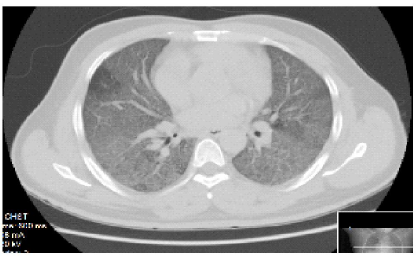 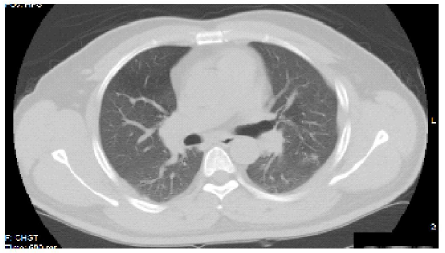 Figure 2: CT abd/pel without contrast. There are bilateral adrenal gland masses. The right measures 3x2 cm transverse and the left is 4x2.4 cm transverse. They are heterogenous with areas of enhancement. 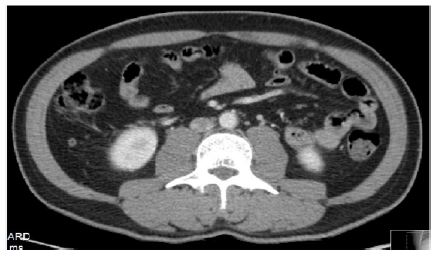 Figure 3: CT chest without contrast. This is a follow up CT chest two months after the initial one. The previously seen widespread global ground glass opacities are reduced in severity.

This patient, presenting with dysphagia and an oral ulcerative lesion, was presumed to have oral cancer and only after the biopsy was done, was revealed to have disseminated histoplasmosis. Should a fungal infection have been considered in the initial differential diagnosis in this immunocompetent patient presenting with an oral lesion? How high should the index of suspicion be to include disseminated histoplasmosis in the diagnosis? What are the differentials of mucocutaneous lesions?

Our patient was a resident of Bangladesh for most of his lifetime, who moved to New York five years ago. He lived in California for one month, but has otherwise resided in the Bronx. He visited his home country for nine days about eight months prior to presentation. His acquirement of the fungal infection may have been attributed to his recent travel, however the organism Histoplasma capsulatum is not common in Bangladesh. Overall, given this patient’s non-endemic travel history and clinical presentation, a diagnosis of disseminated histoplasmosis was not an obvious one at all and required a high index of suspicion.

A presumed diagnosis of oral malignancy was made in this patient given his smoking history. Indeed, the differentials for a painful oral cutaneous lesion should include squamous cell carcinoma, lymphoma, tuberculosis, inflammatory disease and also systemic mycosis such as histoplasmosis regardless of the immune status of the patient [11]. Although cutaneous lesions from histoplasmosis are more common in HIV-seropositive patients, this report highlights that they may also rarely present in immunocompetent patients. The lesions may present in a variety of ways, including ulcers, nodules, warty growths or abscesses [11]. Definitive diagnosis of histoplasmosis is made by a combination of culture, histopathologic visualization of the organism, or antibody and antigen detection.

Disseminated disease is suspected if there is involvement of the reticular-endothelial system (lymphadenopathy, splenomegaly), hematologic system (anemia, leukopenia, thrombocytopenia), gastrointestinal system (hepatic involvement, lesions along the GI tract) or CNS system (brain lesions on imaging) [3]. The adrenal gland is one of the most common structures involved, as described by a case series that discussed eight immunocompetent patient from a non-endemic area with bilateral adrenal masses that were biopsied/ aspirated to reveal histoplasmosis [4,12]. Our patient was one such rare case, having bilateral adrenal gland involvement (unilateral involvement is more commonly seen) and also having adrenal insufficiency (most patients have preserved adrenal function). He was treated with corticosteroids along with anti-fungals. Studies have shown that adrenal insufficiency is usually irreversible requiring lifetime hydrocortisone, however some patients may recover their adrenal function after prolonged treatment with fungicidals [12,13].

Amphoterecin is used as initial treatment in patients with severe disease, and then is transitioned to an azole drug for maintenance [11]. Within days of treatment, our patient’s oral lesions regressed and his dysphagia resolved. He was then switched to oral itraconazole, the preferred azole anti-fungal. Six weeks into treatment, the patient’s chest CT had already shown significant improvement in the graoundglass opacities and he is doing well.

Practitioners should include histoplasmosis in the differential diagnosis of a patient presenting with a mucocutaneous lesion, particularly if they have been in an endemic region. It is therefore important to have knowledge about the presentations of disseminated histoplasmosis in order to diagnose and initiate treatment in a timely manner.